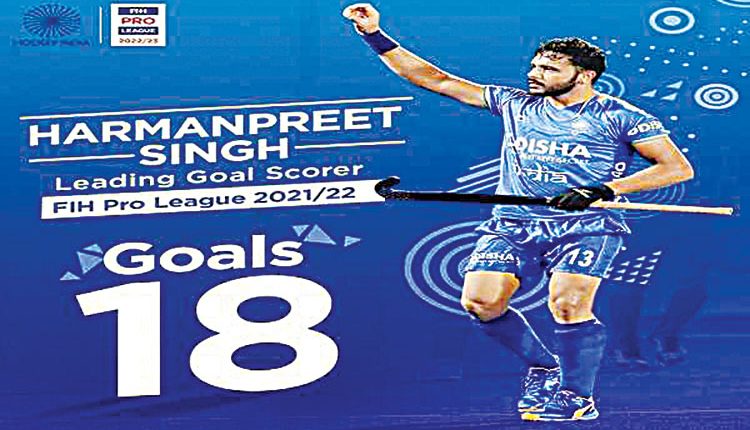 New Delhi, Oct 29 (Agency) India men’s hockey team defender Harmanpreet Singh was presented with the Top Scorer award along with cash prize for being the leading goal-scorer in the FIH Men’s Hockey Pro league 2021-22 season. Having played 16 games in the last season, the 25-year-old had scored 18 goals, 14 of which had come from penalty corners. During the course of the tournament, Harmanpreet had also taken his senior international goals tally past 100. The dragflicker was presented the award after FIH Men’s Hockey Pro League 2022-2023 Friday’s encounter between India and New Zealand here at the Kalinga Stadium. Accepting the honour, Harmanpreet said: “I am thankful for the FIH for presenting me with the award and for recognising my efforts. I want to dedicate this to my teammates who have supported me throughout my sporting career and have helped me every step of the way.”

Men’s team had finished third in the tournament last season, after picking up 30 points in 16 games, just behind Netherlands and Belgium. With the start of the new season, Harmanpreet expressed hopes of winning the title this time around. “With the start of the new season of FIH Pro League, I wish to continue to perform in the same vein of form and hope that this time, I can help the team in winning the title,” he said.