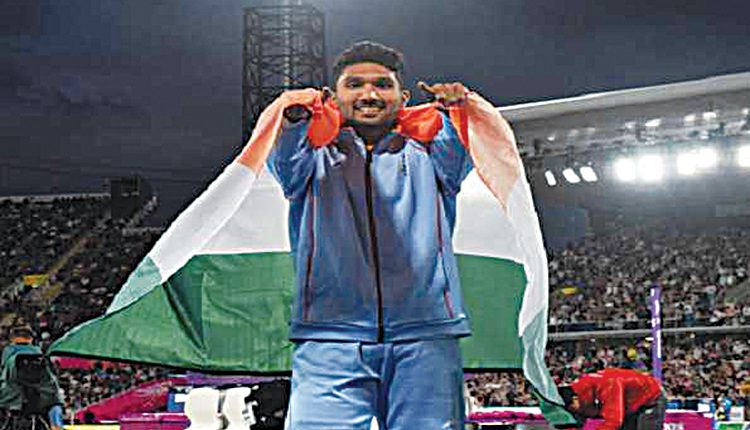 Birmingham, Aug 4 (Agency) India’s Tejaswin Shankar won a historic bronze medal in the men’s high jump event at the Commonwealth Games 2022. Shankar’s best of 2.22m at the Axelander Stadium on Wednesday helped him win India’s first medal in the high jump ever at the CWG. Former world and CWG champion Donald Thomas of the Bahamas was tied with Shankar at 2.22m but the Indian earned the bronze as he cleared all his jumps – 2.10m, 2.15m, 2.19m, and 2.22m – in the first attempts. “I had a long collegiate season and started jumping in January but getting a bronze here is like a dream come true and I’m just happy to take something back home with me,” Shankar said after the win.

Prime Minister Narendra Modi congratulated Shankar for winning India’s first athletics medal in the men’s high jump event.”Tejaswin Shankar creates history,” Modi tweeted. “He wins our first high jump medal in the CWG. Congratulations to him for winning the Bronze medal. Proud of his efforts. Best wishes for his future endeavours. May he keep attaining success. “World indoor championships bronze medallist Hamish Kerr of New Zealand won the gold for clearing 2.25m, while Australia’s Brandon Starc bagged the silver. Shankar, who holds India’s men’s high jump national record of 2.29m, had cleared the Athletics Federation of India’s (AFI) entry standard for CWG 2022 at a competition in the US but was initially excluded from the Indian squad as he did not participate in India’s national inter-state meet as mandated.

He challenged the decision in the court and the Delhi High Court directed the AFI selection committee to consider the high jumper’s name for the Games.The AFI then included Shankar for the Games, replacing Arokia Rajiv, who was disualified, in the 36-member squad. The drama did not end there as the organisers of the Birmingham Games initially rejected his inclusion citing that only a like-to-like replacement is permissible for the tournament.In sudden turn of events, Shankar’s name was cleared to compete at the CWG by the Birmingham organisers after a ‘Delegate Registration Meeting’ (DRM) of the chef-de-missions at the Athletes Village five days before the opening ceremony.

Govt can pass Women’s Reservation Bill in minutes if it wants: Alva