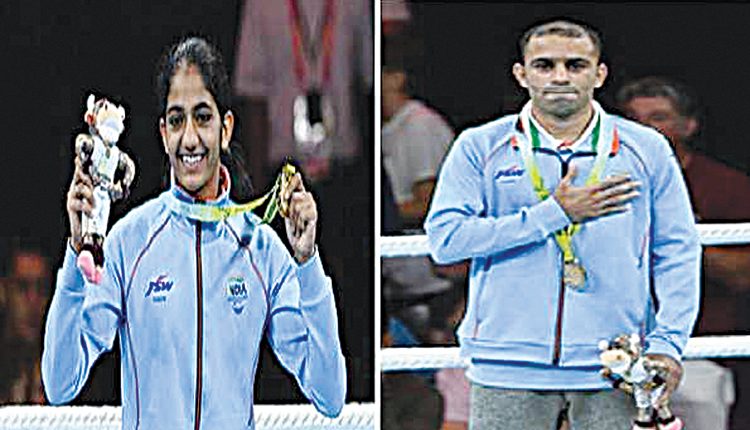 Birmingham, August 7 (Representative) Boxers Nitu Ghanghas and Amit Panghal gave India two gold medals by outpunching their respective English rivals in the finals of CWG here on Sunday. Nitu thrashed Demie-Jade Resztan 5-0 in the final of the women’s minimum weight category and Amit defeated Kiaran Macdonald in the men’s 51kg final to win his first CWG gold, he had won silver in 2018. Panghal made great strides in the first round. He earned 10 points from all, while Macdonald won nine as the judges decided in Panghal’s favour. In the second round, Panghal kept up the same momentum and executed his upper cuts when required. Macdonald employed counter tactics, but could not find answers to Panghal’s power and alacrity in the second round.

Panghal’s dominance continued in the final round too as he earned points with ease, which compelled the judges to decide in his favour. He had entered the finals by defeating Patrick Chinyemba of Zambia in the semis by a margin of 5-0. This performance will boost Panghal’s confidence after his debacle at the Tokyo Olympics.Panghal is an Asian Games gold medallist in the past and also has a world championships silver to his name. Earlier today, Ghangha also clinched gold after defeating Resztan. She won on the basis of points by 5-0 over her English opponent.Ghangha was a notch above Resztan throughout the match. This is her first major senior medal for Nitu.