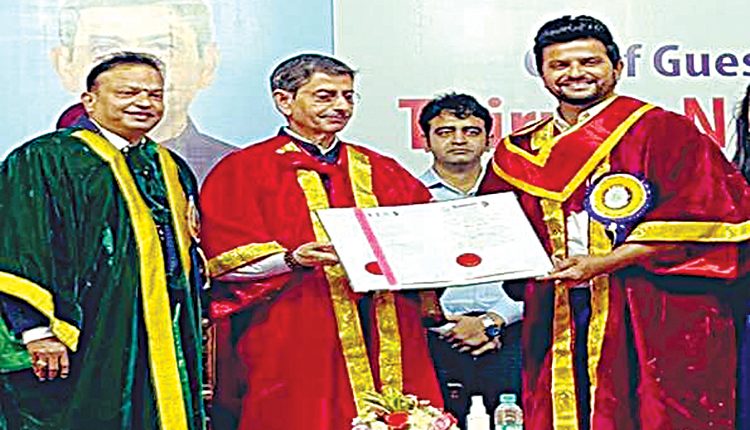 Chennai, Aug 5 (Agency) One of Indian cricket’s most loved legends Suresh Raina was today given Honorary Doctorate at the 12th Convocation ofVels Institute of Science and Technology and Advanced Studies. The south paw, who has played 205 games in the IPL, has scored 5,528runs in that time, having played for the MS Dhoni-led Chennai Super Kingsevery season, apart from 2016-17 when he turned out for the Gujarat Lionsas their captain, continuing to score plenty of runs for them as well.Raina, who is known as Mr IPL, has scored the most runs as a batter for theCSK franchise in the history of the IPL.

Known as ‘Chinna Thala’ by the CSK fans, Raina, who has also won theChampions League T20 and the ICC Champions Trophy was felicitatedby Tamil Nadu Governor RN Ravi at the Convocation. Speaking on the occasion, the four-time IPL winner with CSK and ODIWorld Cup winner in 2011, Raina said, “Receiving this honorary doctorateis a very big moment for me, not only because I am here at this outstanding institution but also due to the love the people of Chennai have shown to meover the years.” “This city is like home for me and there’s nothing that compares with theconnect I have with the fans over here”, he said.