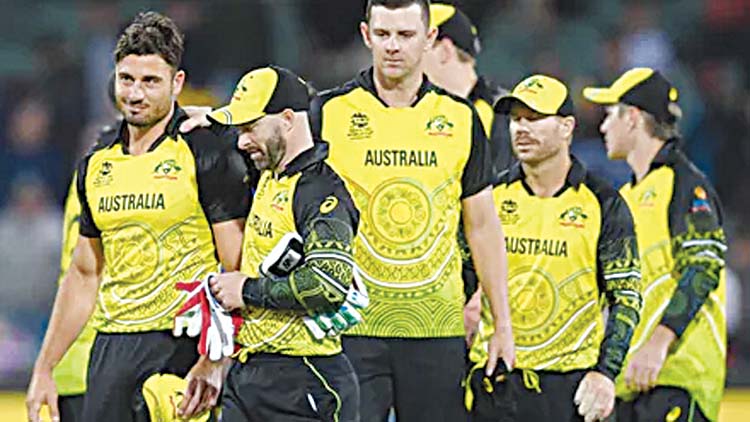 Adelaide, Nov 4 (FN Agency) Rashid Khan’s late cameo helped Afghanistan in getting close to the target in their final Super 12 encounter of the ICC Men’s T20 World Cup against Australia in Adelaide but they still fell short by four runs, bringing an end to their campaign. Afghanistan captain Mohammad Nabi won the toss and asked Australia to bat first. The hosts didn’t get off to the kind of start they would have liked as they lost both of their openers Cameron Green and David Warner with just 48 runs on the board. Green opened the innings in absence of regular captain Aaron Finch, who was ruled out with a hamstring injury. Steve Smith, who replaced Tim David in this match, also departed soon, leaving Australia reeling at 52/3, reported ICC. Mitchell Marsh took over the reins after that with an excellent knock of 45 from 30 deliveries. Marcus Stoinis also added valuable 25 runs from 21 deliveries. But the real difference was made by Glenn Maxwell, who smashed an unbeaten 54 from 32 deliveries.

Australia kept losing wickets at regular intervals but Maxwell stuck around and lifted them to a competitive total of 168/8. Rahmanullah Gurbaz showed his talent and potential once again as he took on the Australian pacers to play a breathtaking cameo of 30 from 17 deliveries at the top of the order. Gurbaz smashed two fours and as many sixes during his knock, and he was finally dismissed while attempting a big shot off Kane Richardson. Rashid Khan is mostly famous for his wrist-spin but he has always been a handy batsman. He showed his batting talent once again today as he smashed 48 from just 23 deliveries to take Afghanistan close to the target. His knock consisted of three fours and four huge sixes, and gave the Afghan fans something to cheer for. Australia needed to win by a big margin in order to stay in a safe position in the semifinal race. This win has given them two valuable points but it hasn’t improved their NRR much. Their NRR now is -0.173, lower than England’s +0.547. If England win their next match against Sri Lanka, Australia will get eliminated from this World cup.