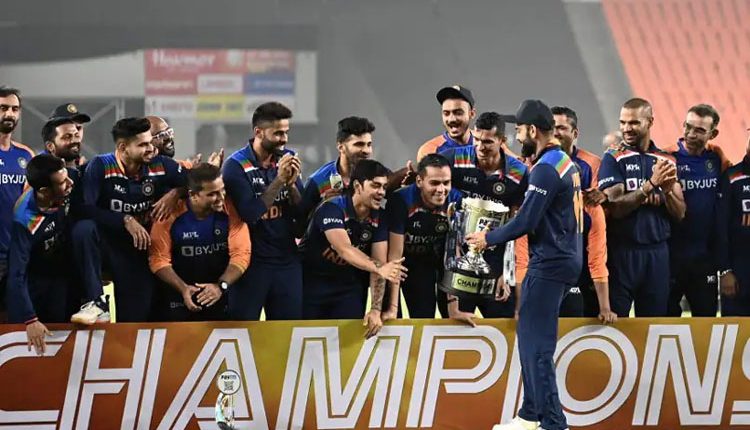 Ahmedabad, Mar 21 (Agency) With the emphatic victory, Virat Kohli’s men have extended their winning streak in T20I cricket to 6 series, a fine run in the lead up to T20 World Cup. After being invited to bat first, Rohit Sharma (64) and skipper Virat Kohli (80) blasted half-centuries as India reached 224/2 in stipulated 20 overs. Chasing a mammoth target, Jos Buttler (52 off 34) and Dawid Malan (68 off 46) kept India on the edge with a dangerous 130-run stand. However, once Buttler got out in the 13th over bowled by Bhuvneshwar Kumar, England fell well short of the total.
In the end, Eoin Morgan led England could only score 188/8 in 20 overs, losing the match by 36 runs. Bhuvneshwar Kumar (2/15) was the star of India’s bowling attack. Shardul Thakur also chipped in with 3 wickets. Earlier, Virat Kohli moved himself up the order to open with Rohit after India decided to drop opener K L Rahul to accommodate an extra bowling option in left-arm pacer T Natarajan. Rohit and Virat put on 60 runs inside the first six overs. Both batsmen accumulated boundaries and the hosts were looking set for a big score.
Rohit continued with his carnage and brought up his half-century in the eighth over of the innings. In trying to further accelerate the innings, Rohit (64) was dismissed by Ben Stokes. Suryakumar Yadav (32) , who came into bat at number three, was in full destruction mode, but Chris Jordon pulled off an effort for the ages at the boundary rope as he helped in sending the right-handed batsman back to the pavilion. In the final four overs, Pandya (17-ball 39) and Kohli went berserk and the hosts ended up with a total of more than the 220-run mark.