Whole of J&K, Ladakh is integral part of India, shall retrieve our regions: BJP 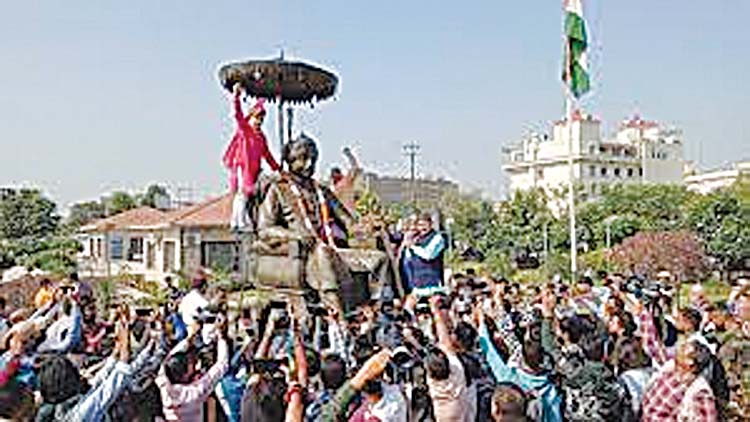 Jammu, Oct 27 (Agency) Celebrating the Accession Day here on Wednesday, J&K BJP president, Ravinder Raina on Wednesday said that the whole of J&K, Ladakh is an integral part of India and we shall retrieve our regions. Raina, flanked by other senior leaders, celebrated Accession Day with vigour, at Maharaja Hari Singh Park, near Tawi River. The national flag was also hoisted on the occasion while paying glorious tributes to the great Maharaja. Ravinder Raina said that the whole J&K is celebrating this day as it has come after supreme sacrifices by Nationalists. ”Vijay Diwas is like Republic and Independence day for us as this was the day when our maharaja made J&K an integral part of India.

He added that the Instrument of Accession signed by Maharaja was full and final in which he united the whole of Jammu & Kashmir with the rest of India. Some parts of Jammu and Kashmir are still under the illegal occupation of Pakistan and China and the day is not far when we will hoist the tricolour there as well,” he said and added that Congress ditched Maharaja and the state of Jammu & Kashmir. He also said that India has always respected minorities and has given the top positions of PM and President to the minorities. Jugal Kishore Sharma said the Accession day is a very important day for us.

He said that the Accession Day marks the signing of the instrument of accession by the maharaja with the governor-general of India, Lord Moutbatten, on October 26, 1947 to join the then dominion of India. He provided insight on the historic events during the accession of J&K with the Union of India. Dr. Nirmal Singh remembered the important role played by the Maharaja Hari Singh and chain of events during the unification of J&K with dominion of India and the negative role of the then Prime Minister Jawahar Lal Nehru and sheikh Abdullah. Sat Sharma attributed the free atmosphere of present J&K to the great vision of Maharaja Hari Singh. He said the present dispensation under PM Modi strengthened J&K and the country.

Yogi bats to make organ transplant easy in UP