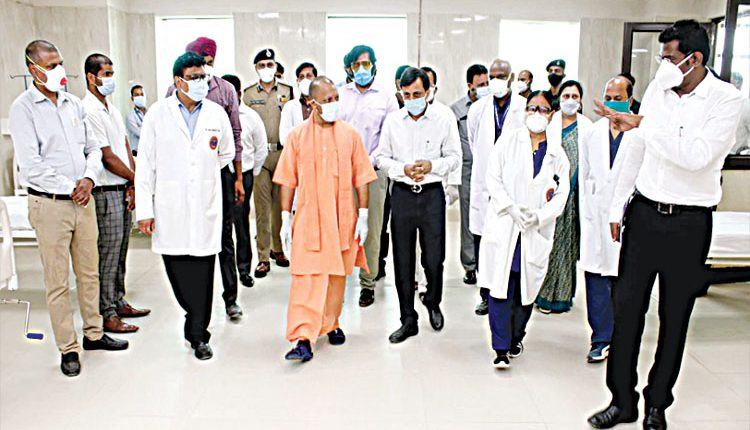 Lucknow, May 16 (FN Agency) Giving a befitting reply to Samajwadi Party chief Akhilesh Yadav, the UP cabinet minister and spokesperson of the Uttar Pradesh government Siddharth Nath Singh said the former had indulged in petty politics instead of helping the people on ground. Expressing displeasure over the confusing statements of Akhilesh, the UP minister said that the former CM should learn from Chief Minister Yogi that despite being corona positive, he continued to work in the public interest. He did not rest for a day despite being Corona positive few days ago even held regular meetings with the officials.

“As soon as the CM turned Covid negative, he went out to review the health preparations in the districts without delay,” Siddharth Nath said here in a statement on Sunday adding ” it is easy for opposition leaders to make political remarks while confined in his AC room.” He said that first Akhilesh created confusion among the people in the name of ‘BJP’s vaccine’ and now he has been talking about making a policy on the vaccine. “He is misleading the public by indulging in the petty politics in this time of crisis,” said Singh. Siddharth Nath wanted to know from Akhilesh Yadav how many places he himself visited to know the ground reality and help the citizens of the state. He said that CM Yogi, during a course of last few days, reviewed the health facilities in about 38 districts, physically or virtually.

He said the state government would provide free ration to weaker section and financial assistance to daily wage earners of urban areas like the government did the last year. Mr Singh said that four lakh members of more than 60,000 surveillance committees have been pressed into service by the Yogi government to make door to door survey whilw Rapid Response Teams conducting tests and delivering medical kits. He said that more than 44 million people have been tested so far in the state while more than 1.45 crore vaccine doses had so far been administered. Food is being delivered to all the needy through community kitchens. Siddharth Nath Singh said that while respected institutions like WHO, NITI Aayog and Mumbai High Court are appreciating the Covid management model of the Uttar Pradesh government, the SP is making fun of itself among the public by making making petty and falsw statements. He advised Akhilesh Yadav to come out of the state of complacency and help the humanity.

Five more people, including 2 in Tuticorin, arrested for selling Remdevisir in blackmarket