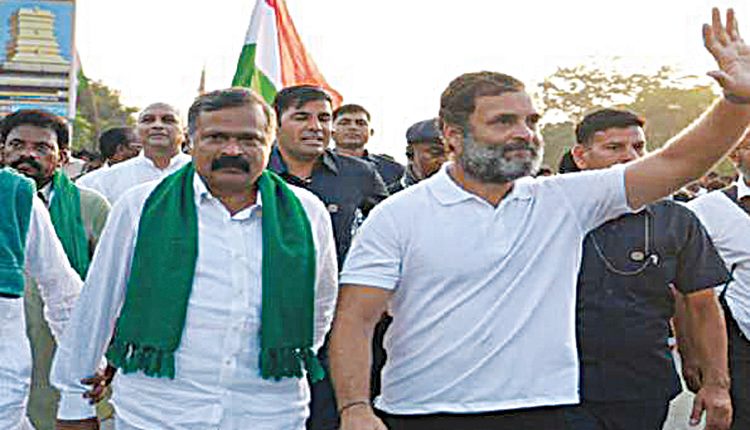 New Delhi, Oct 21 (Representative) Congress MP Rahul Gandhi has said that the Congress opposes the privatization of Visakhapatnam Steel Plant (VSP), ‘three capital concept’ and also opposes diluting of the gram panchayat system in AP. Rahul Gandhi ’s Bharat Jodo Yatra concluded in Andhra Pradesh on Friday. Rahul Gandhi began his Bharat Jodo Yatra on October 18 and he walked over 100 km. He resumed his yatra on Friday at Kerebudur Village for the evening leg. Large number of Congress leaders from Andhra Pradesh and Telangana states joined the Yatra in AP. Congress sources said that the Bharat Jodo Yatra would enter Telangana state on October 23. Meanwhile, in a statement here on Friday, Rahul Gandhi said “We support the continued public sector status of the Visakhapatnam Steel Plant as an asset of the Indian people. We note that the AP state government has systematically undermined the Panchayati Raj system in Andhra Pradesh, and are strongly opposed to this assault on democratic institutions”. Rahul Gandhi said “Our interactions with diverse groups during the Yatra in Andhra Pradesh have brought to light several significant issues impacting the people. The Congress party stands committed to grant “Special Category Status: to Andhra Pradesh and develop a single capital at Amaravati”. Rahul Gandhi said that they had recalled the commitments made in 2014, in and by Parliament, to the people of Andhra Pradesh.

These were not assurances made by one person or one party, but had been made by the Parliament to the people of Andhra Pradesh, he stated. The Congress is determined to ensure that these commitments are met—fully and speedily. Both the Central and State governments have failed in this regard. “The Congress party is deeply aware of the challenges we face in Andhra Pradesh”, he said, adding that the state was a bastion of the Congress party in the past and has produced outstanding statesmen for India. “There’s a huge distress among farmers, labourers and poor people in Andhra. The incredible support we have received demonstrates how much potential there is for the Congress to expand in the state, grateful to the people of Andhra Pradesh”, he said. “This morning, as the Bharat Jodo Yatra completes its journey through Andhra Pradesh, we thank the people for their overwhelming support and encouragement. It has truly been a memorable experience”, Rahul Gandhi said. The unparalleled economic distress caused by skyrocketing prices and record unemployment, as well as the increasing concentration of political and economic power in a few hands are all matters of grave concern, he said.

Companies to watch out for in 2022