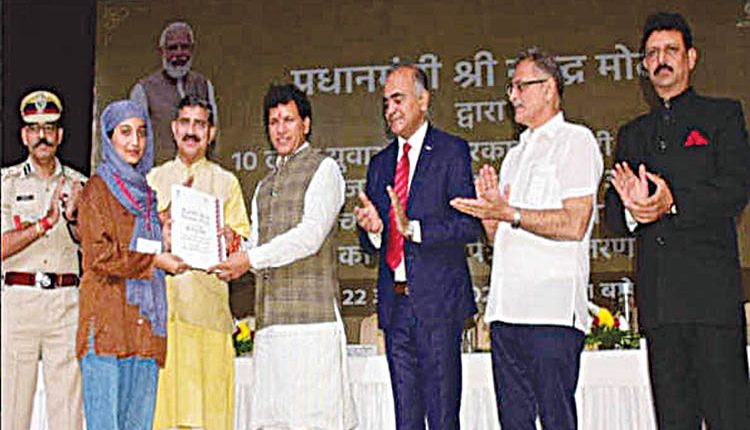 New Delhi, Oct 22 (Agency) Union Minister of State, Ministry of Agriculture and Farmers Welfare, Kailash Chaudhary on Saturday said that the country is on the path to become a developed nation under the leadership of Prime Minister Narendra Modi. “The Government is working with a long term vision for the next 25 years instead of five year plans to ensure that India becomes a developed nation by the year 2047,” said Chaudhary after distributing appointment letters to around 50 candidates selected for jobs in various government departments and organizations at Convention Centre, Jammu.

The programme was held on the sidelines of the inauguration of ‘Rozgar Mela’ by the Prime Minister, Narendra Modi via video conference. The Minister further said that the world class roads and highways are being constructed to ensure connectivity to reach all corners of the country that will also strengthen the nation’s defence system. The Minister highlighted the role of today’s youth in achieving set targets during this period. He called upon the youth to work with patriotism and with a sense of nationalism to spearhead India’s progress. The event was also attended by Member of Parliament, Jugal Kishore; Chief Postmaster General (Jammu and Kashmir Circle) Niraj Kumar; Chief Postmaster General (Jammu Region), Col. Vinod Kumar and DIG CRPF, Rakesh Sethi.

After the ‘Rozgar Mela’ event, the Minister also inaugurated an exhibition depicting various technologies related to farmers welfare by SKUAST-Jammu, KVK’s, FPO’s Progressive farmers Self Help Groups. During the inauguration, the Minister emphasized upon youth to become job providers rather than job seekers, saying for making the country Atma Nirbhar, the farmers should adopt new technologies, precision agriculture, vertical farming so as to boost their income from agriculture. The candidates who have been handed over the appointment letters have been recruited in the Department of Posts, Central Reserve Police Force, CISF, Canara Bank, Jammu and Kashmir Grameen Bank and Department of Water Resources & River Development.

During the program, the Minister congratulated the candidates and informed that the Prime Minister, Narendra Modi has announced 10 lakh jobs to the youth within one year to be provided in the subsequent months from now on. Free gas connections under Ujjwala, PMAY houses for rural and urban areas, Har Ghar Nal Se Jal and other schemes besides construction of infrastructure in mission mode throughout the country are being undertaken to speed up the pace of development, the Minister added. The Minister further said that the farmers should utilize various government schemes meant for agriculture as Atma Nirbhar Kisan would be the key for making Atma Nirbhar Bharat. The Minister also distributed seeds of the newly released variety of Wheat JAUW 672 by SKUAST-Jammu among the farmers.

Centre making too much noise over job letters: NCP