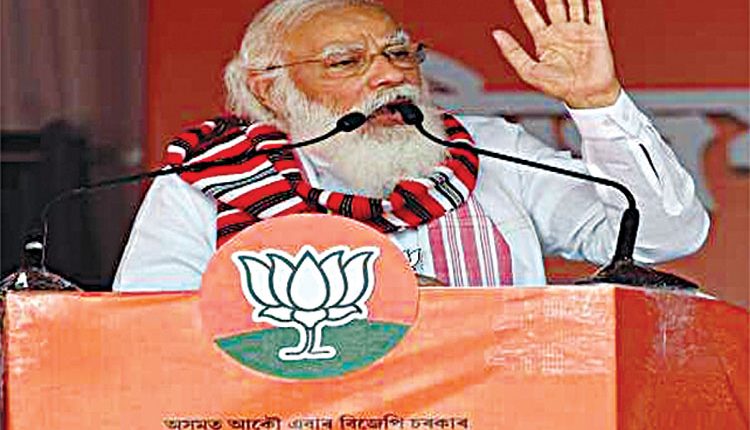 Guwahati, Mar 21 (Agency) Prime Minister Narendra Modi today said that the people of Assam will again repose their faith in the double engine government, and has already decided that they will bring the BJP government in power. “It is now decided that Assam will get double engine government,” Mr Modi said under the NDA government, the wildlife of the state has been taken care of, which the previous government failed. Mr Modi said referring to the development of a four-lane bridge over the Brahmaputra river, he detailed out the infrastructure development works taken by the BJP government.

Attacking the Congress, PM Modi said more than Rs. 40,000 crore have been invested for the development of the oil and petroleum sector in the state. Mr Modi said over Rs. 1,300 crore have been invested for biorefinery that will help create ethanol from bamboo waste and thereby generate employment. “Congress means confusion; Congress means ‘bomb, bandook and blockade’. The people of the state need to keep this Congress ‘loot ka engine’ away. “While Congress indulges in politics over tea, the BJP takes care of the workers of the tea gardens, provides them education, medicines, jobs,” Mr Modi said. Polling for assembly elections in Assam is scheduled to begin with the first phase on March 27 and the last phase to take place on April 6. The counting of votes is scheduled to happen on May 2.