More than 35,000 jewellers observe token strike in TN against HUID 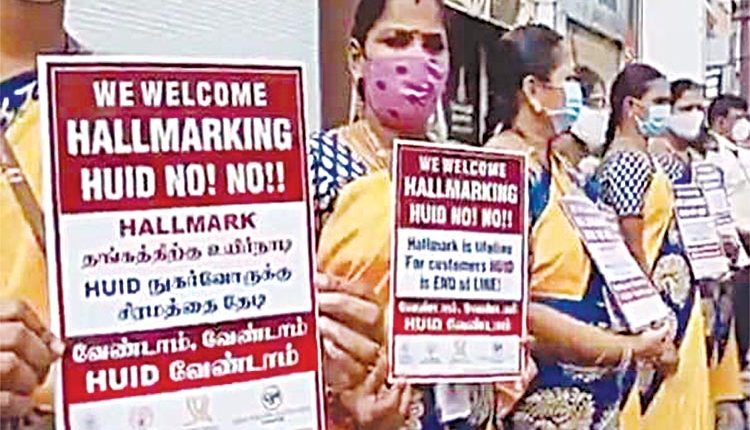 Chennai, Aug 23 (Agency) As part of the nation-wide strike, more than 20,000 jewellery shops in Tamil Nadu observed a toekn strike on Monday in protest against the BIS’ decision to make gold Hallmarking Unique ID (HUID) mandatory for every jewellery. The protest was organised for about two-and-a-half hours frm 9.00 am to 11.30 am. Members of the Chennai Jewellers’ Association (CJA) carrying placards denouncing the move staged a protest demonstration in line with the nationwide strike call given by the National Task Force on Hallmarking. More than 500 people took part in the agitation, jointly organised by the CJA and the Jewellers and Diamond Traders Association at NSC Bose Road in Parrys corner area of the city.

More than 35,000 shops in Tamil Nadu were closed during the protest. Earlier, hallmarking was done in batches. While jewellery stock waiting to be hallmarked was already piling up, the HUID process would only lead to further delay, affecting the sector. The new process, which also seeks customers’ details, could pose a threat to their rights, he said. Members of the Jewellers and Diamond Traders’ Association Madras, said nearly 25 per cent of the 47,000 jewellers registered with the BIS belonged to Tamil Nadu.