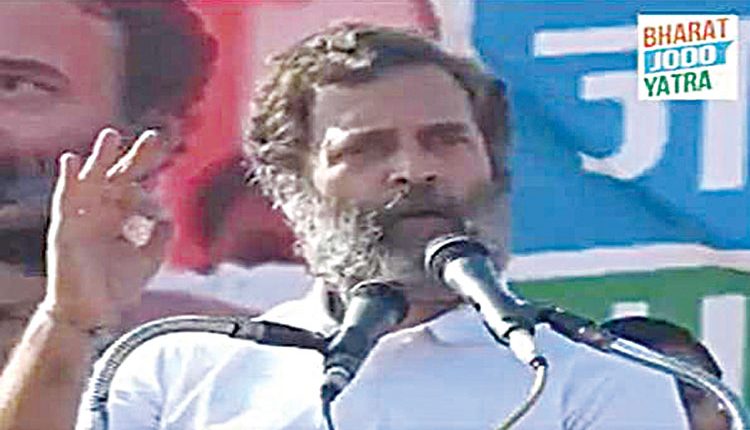 Khandwa (MP), Nov 24 (Representative) In a political broadside against the BJP in general and Prime Minister Narendra Modi in particular, erstwhile Congress president Rahul Gandhi alleged on Thursday that an attempt is underway to divest India’s tribal folk of their rights by converting them into forest dwellers. Addressing an adivasi meeting after his Bharat Jodo Yatra reached this district’s Badoda Aheer village – which is the birthplace of tribal freedom fighter Tantya Bhil – Mr Gandhi said, “In the recent past, I heard the Prime Minister’s speech in which he used the term ‘vanvasi’. A divergent line of thinking lies behind that word.

The tribal folk are the ‘first owners’ of this country, which implies that the ethnic community enjoys rights over land, forest and water. If a tribesman’s child is dreaming of eventually assuming the mantle of engineer or doctor then the dispensation should extend all possible assistance. However, when BJP regimes privatise schools and colleges and hand over those institutions – in addition to infirmaries – to industrialists, these children are deprived of education and their families of treatment. In the name of privatisation, BJP governments sell Railways and the BHEL.” Bowing to Tantya Mama, Mr Gandhi said that the former’s very name fills the mind with thoughts of struggle, fearlessness and revolution. “When he was ascending the steps of the gallows, there was not even a trace element of trepidation in him because he possessed unalloyed affection for tribes. Demonetisation and the GST injured dalits, backward classes, adivasis, peasants and labourers,” Mr Gandhi alleged. Earlier, Congress General Secretary Priyanka Gandhi Vadra and her spouse Robert Vadra joined the Yatra.