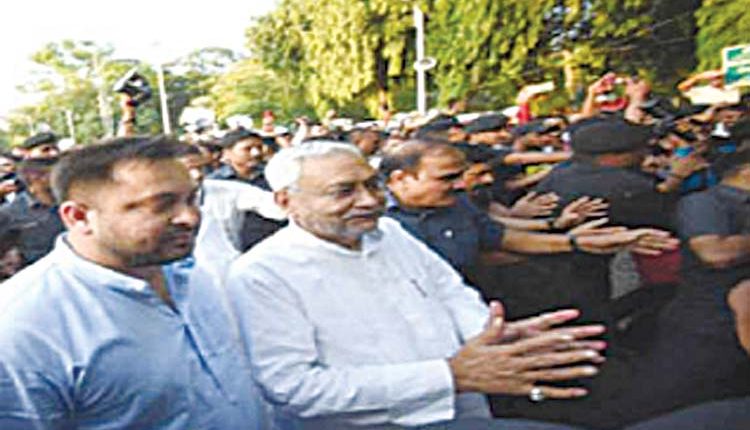 Patna, Aug 9 (Representative) After staking claim to form a new government of the Grand Alliance, Chief Minister Nitish Kumar on Tuesday said the new regime would sincerely serve the people for accelerating Bihar’s development.. Less than two hours after his resignation as Chief Minister heading the NDA government in Bihar, Kumar called on Governor Phagu Chauhan and staked claim to form a new government with the support of seven parties of the Grand Alliance. Kumar was accompanied by RJD leader Tejaswi Prasad Yadav, HAM chief Jeetan Ram Manjhi, other Grand Alliance leaders and JD(U) president Rajiv Ranjan Singh alias Lalan Singh to the Raj Bhavan. Kumar has claimed the support of 164 MLAs, as per as per letters submitted by him to Governor. They comprise 45 legislators of the JD(U), 79 of RJD, 19 of Congress, 12 of CPI(ML), 4 of HAM, 2 each of CPI and CPI(M) and one Independent.

Talking to the media after coming out of the Raj Bhavan, Kumar confirmed that his government would have the support of seven parties and one Independent, with the total number of supporting lawmakers being 164. He said his government would serve the people with all sincerity and dedication. The pace of development would be accelerated so that Bihar could achieve a new high on the path of development and prosperity, he asserted. Responding to queries about his decision to quit NDA, he said all MPs and legislators of his party had expressed their opinion in favour of snapping ties with BJP and the National Democratic Alliance. All leaders of his party had been requesting him to snap ties with BJP which prompted him to take a decision to walk away from NDA, he added. Kumar said in the 2020 Bihar Assembly elections, his party JD(U) had won only 43 seats and he was not prepared to become CM again. On repeated requests from several senior BJP leaders, he had agreed to become Chief Minister, he stated. To a poser about his stand on corruption, Kumar said it was a core issue for him and he would never compromise with graft. BJP had been trying to disturb the communal amity in the country which he did not like, he added. Nitish Kumar had earlier headed the Grand Alliance government from 2015 to 2017 when he deserted the Alliance to join hands with BJP to form the NDA government in Bihar.