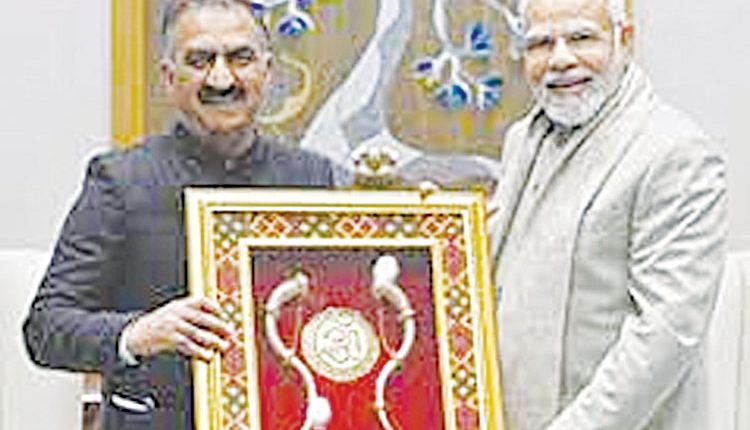 Jammu, Jan 25 (FN Agency) To save the lands of poor farmers and other landless people from being evicted and their houses from demolition, a memorandum was submitted by Harsh Dev Singh, former minister and chairman Aam Admi Party on Tuesday in the office of Prime Minister Narendra Modi in south block, New Delhi. Through the memorandum, Harsh Dev drew the attention of the PM towards the govt order seeking retrieval of lands from the people espically the poor village folk and sought its immediate withdrawal so as to save the marginalized people from misery and starvation. He was accompanied by Gagan Pratap Singh and Purshotam Parihar senior leaders of the party. Singh as per the memorandum said that the poor indigent farmers and other landless people of J&K are being evicted from their marginal land holdings by the govt through the coercive apparatus of the state.

Not only have the eviction proceedings been launched to dispossess them of their small land holdings but notices have also been served upon them to dismantle the residential units constructed by them on such lands. The govt notification has not only triggered massive outrage among the poor people but has also led to UT wide protests with people taking to streets on a regular basis against the draconian order, he said. Pertinent to mention that the poor farmers in villages have been cultivating the impugned lands for several decades and are dependent upon them for their livelihood. “They cultivate the said lands to provide two square meals a day for their respective families. Evicting them from the said lands will therefore result in loss of livelihood and ultimately starvation”, stated Singh.

“We are a welfare state as enunciated in the Directive Principles of state policy and the govt is duty bound to protect the livelihood of its subjects. Moreover the right to livelihood is a fundamental right as enshrined in the constitution and snatching the same would be the greatest injustice with the people besides being in violation of the constitutional guarantees,” he stated. Further pertinent to mention that the anti-encroachment drive was meant to be initiated against the land mafia and other influential land grabbers but not the poor people. It is disturbing however that the influential and powerful people are being protected and sheltered by the govt with the helmsman directing the ire against theindigent farmers and other landless people, he added. Several ex-Ministers and MLAs who have encroached lands worth several crores by using their power and authority continue to enjoy the patronage of the higher ups in the system thereby providing the most glaring example of misrule and patronized corruption besides of the anti poor and anti farmer policies of the J&K govt.