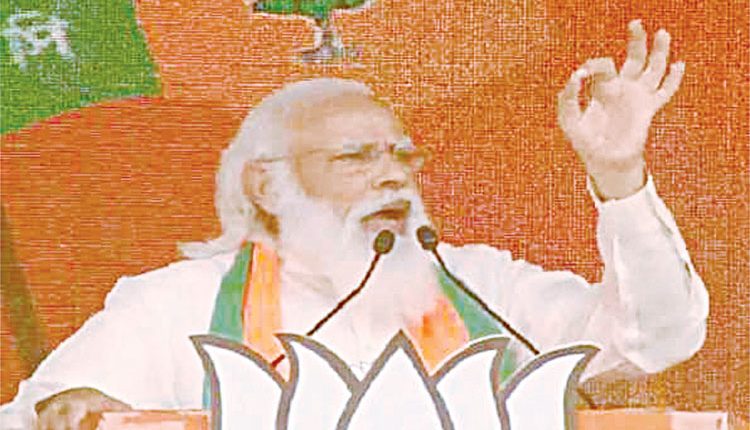 Kolkata, Mar 7 (Agency) Prime Minister Narendra Modi on Sunday said the dream of ‘Sonar Bangla’ will be fulfilled. Addressing a mega rally at iconic Brigade Parade ground here, he said, “Today, I have come here to assure you of Bengal’s development, to increase investment here, to protect Bengal’s culture and to bring change.” Mr Modi said, “We promise to bring ‘Asol Poriborton’ in Bengal.” He said, “Ashol Poriborton means Bengal, where trade and business flourished, where maximum investment came. Ashol Poriborton means Bengal, which has the modern infrastructure of the 21st century.”

Mr Modi said, “Our goal is not just to change power in West Bengal. We want Bengal’s politics to be development-centric. That is why we are talking about Ashol Poriborton.” He asked the electorate to put an end to corruption and unemployment. The Prime Minister said the next 25 years are very important for the development of Bengal. The development here in the next five years will lay the foundation for State’s development in the next 25 years, he stated. Mr Modi said,” We’ve worked very hard to develop Kolkata but due to their(TMC) commission culture, many important projects of Kolkata airport are stuck.”

He said the BJP will stop this and complete those projects. “Won’t let anyone ruin Bengal further. I have come here to make you believe that we’ll work hard for farmers, businessmen and the development of sisters and daughters. We will live every moment to fulfill your dreams, the PM assured. He said, “Kolkata is the city of joy. Kolkata also has a legacy of a rich past and also has prospects. There is no reason why Kolkata cannot be a city of the future while preserving its culture.” “You know it very well how the democratic system has been destroyed here. BJP will strengthen this system. We will bring the change to re-establish public belief in govt systems, in the police, and the administration,” the Prime Minister said. Attacking TMC, Mr Modi said Bengal Needs Peace, Security for its Women and Girls. “The people of Bengal had chosen you as ‘Didi’ but then why did you remain the aunt of a nephew? The people of Bengal are asking only this one question from you,” he said. “You are well aware of the condition of ‘Maa, Manush, Maati’. Mothers are being attacked on the streets and in their houses. Recently, the cruelty unleashed on an 80-year-old mother has shown their cruel face to the entire country,” the PM said. Mr Modi said, “Emphasis will be given to the expansion of the new National Education Policy in West Bengal. Study of subjects such as engineering, medical, technology, will be emphasised in Bangla language.” He said, “It’s Left-Congress vs people of Bengal in this election. And added that people are looking for peace and security for their daughters.” Mr Modi said, “Didi and her cadres broke the trust of people.”

“Bengal relied on Mamata didi for change. But Didi and her cadre broke this trust. These people broke the trust of Bengal. These people humiliated Bengal. Here the sisters and daughters were tortured,” he said. Welcomes Mithun Chakraborty to BJP, the Prime Minister said, “We Will Win Your Hearts Through Work, Commitment to Development.” Mr Modi said this Brigade Parade Ground has been witness to many great leaders and also witnessed those who have disrupted West Bengal’s progress. People of Bengal never left their hopes for change. He said never been blessed with such a large crowd. “I have had the privilege of addressing hundreds of rallies in political life, but in such a long tenure I have never been blessed with such a large mass group, I have got such a scene today,” the Prime Minister said.