Didi will be shown door on May 2 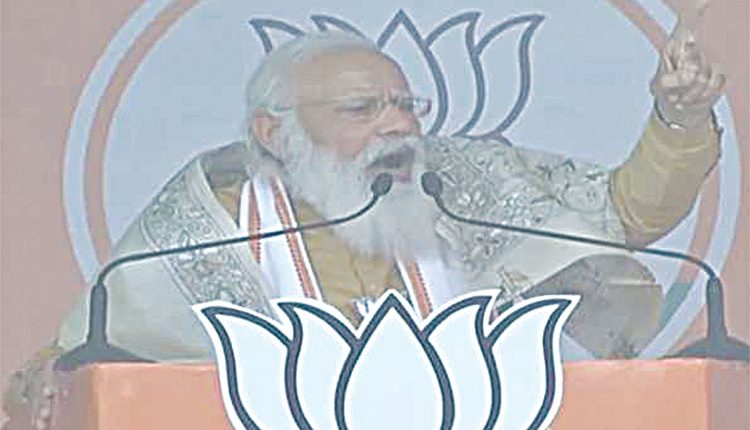 Kanthi, Mar 24 (Agency) Prime Minister Narendra Modi on Wednesday said, “Didi’ talking about ‘Duare Sarkar’ (govt at doorstep), but she will be shown door on May 2.” Addressing a public meeting here, Mr Modi said “Asol Poriborton’ need of the hour. Didi jacche, ashol poriborton asche will be heard on May 2 in Bengal.” “Didi, even the children of West Bengal have understood your ‘khela’. Thus on May 2, West Bengal will show door to Didi,” the PM said.

He said this is a very crucial time for the first-time voters and youth aged around 25 in Bengal, The Prime Minister said they have the responsibility to build the future of the state and thus, ‘Asol Poriborton’ is the need of the hour. Mr Modi said BJP’s Bengal manifesto made keeping in mind the development and aspirations of people of Bengal, He alleged that the Trinamool Congress (TMC) government has only spread darkness in Bengal. The Prime Minister said the BJP’s double engine government will give ‘Sonar Bangla’ to the people. Attacking the ruling state government, Mr Modi said the coastal ecosystem of West Bengal has been ruined by syndicate and corruption He said, “They (TMC) have destroyed Haldia’s economy.”

“It is time to free our coastal people from cut money culture and corruption and it depends on the power of your votes,” he said. The Prime Minister said the Central government is taking steps to modernise the Petuaghat Fishing Harbour. ‘The sea’s coast has immense economic activities associated to tourism. There are also possibilities of cruise tourism. You have assets such as the Digha beach,’ he said. Stating that the Central government is promoting tourism with several initiatives, Mr Modi said Medinipur will benefit a lot from such initiatives with a double-engine government in place. The Prime Minister said BJP committed to development of Bengal Asserting that the development of Bengal is BJP’s commitment, Mr Modi said: “We will work very hard for Bengal’s future.” Targeting Mamata Banerjee and her nephew Abhishek Banerjee over Amphan relief, the Prime minister said the relief sent by the Central government has “got stuck in the nephew window.” “Today, the entire West Bengal is asking: Who looted the relief material of Amphan? Who looted the foodgrains sent for the poor?” he questioned.

Amphan relief was looted through ‘bhaipo (nephew) window’, Mr Modi said the BJP will free every scheme of scams in Bengal when voted to power. “Why are Amphan-struck people still forced to live under shattered roofs? Didi is nowhere to be seen when there is a need but when elections draw near, she said “Sarkar Duare-Duare”, the Prime Minister asked. He said the BJP will put a full stop to scams in schemes and cut commission. The Prime Minister said everyone in Bengal has understood TMC’s game. He alleged that Trinamool supremo only appears when elections come knocking on the door. “Our mothers and sisters have come forward in huge numbers to punish TMC in this election,” Mr Modi said. The Prime Minister said, “Didi not giving modern agri infra to farmers of Bengal He said that the farmers of Bengal will break all walls on the state’s development on May 2. Mr Modi said that false accusations are being made to malign Nandigram and the people will give befitting reply for the insults. “I see a sea of people everywhere I go in Bengal,” the Prime Minister added.