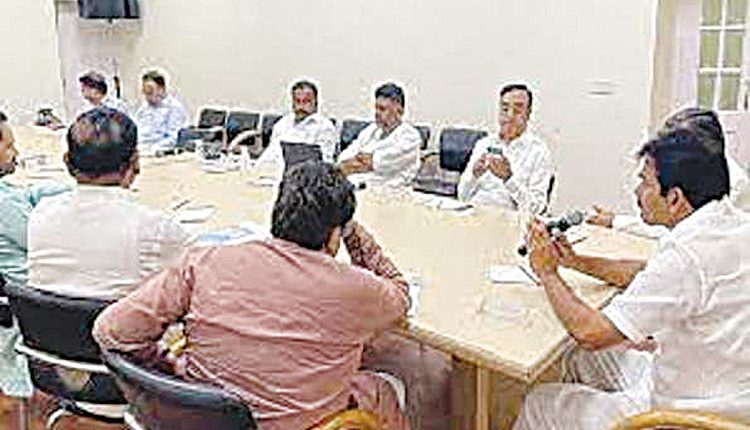 New Delhi, Aug 3 (Representative) Congress leaders held a meeting on Tuesday, ahead of party’s massive nationwide protest on August 5 against the ‘record-breaking’ price rise and unemployment.A preparatory meeting to chalk out the strategy to make it a success was held at the AICC headquarters.General Secretary (Organisation) KC Venugopal, Mukul Wasnik, Ajay Maken, Avinash Pande and various other party leaders including Rajeev Shukla, Shaktisinh Gohil, Manickam Tagore, DK Shivakumar participated in the meeting.General Secretaries, In-charges of state units, state unit chiefs and frontal organisations were among those who attended the meet.

Addressing the meeting, Venugopal said, “By sending ED to raid Herald House, the Modi govt has shown that it can go to any lengths for its vendetta politics. They think they can divert & distract the people from BJP’s failures. They think they can intimidate us. But we will not cower to BJP’s vendetta.” The Congress has planned a massive nationwide protest over the issue of price rise and unemployment on August 5. The party has also planned a march to Rashtrapati Bhavan from Parliament and ‘PM Residence Gherao’ as part of its nationwide protest.

Members of the Congress Working Committee (CWC) along with other senior leaders will take part in the protest at PM residence. Lok Sabha and Rajya Sabha MPs will hold ‘Chalo Rashtrapati Bhavan’ march from the Parliament to Rashtrapati Bhavan to register their protest against price rise and unemployment.In all state capitals, the state units will organise a gherao of Raj Bhavans in which MLAs, MLCs, former MPs and senior leaders will participate. The elected representatives at all levels will court arrest in their respective block and district headquarters on the issue of inflation and unemployment.