Cong a sinking ship with no future: Shah 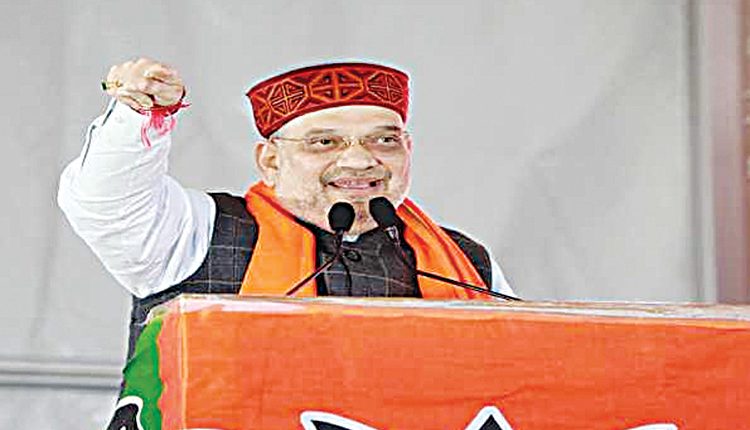 Hamirpur (HP), Nov 2 (Representative) Union Home Minister Amit Shah said Wednesday that Congress has no future as a political entity and it is a sinking ship. He said Congress will exit the Indian political arena once the 2024 Lok Sabha elections are over. Shah was addressing an election rally at Nadaun kaswa of Hamirpur district seeking votes for BJP candidate Vijay Agnihotri from the Nadaun seat.He gave a clarion call to people to ensure that BJP’s Mission repeat -2022 is fulfilled with ease. The Union Minister said it was the BJP-led governments all over India that has been saving lakhs of people from the Covid pandaemic.People across the world recognise Prime Minister Narendra Modi for his efforts in saving people by manufacturing the Covid-19 vaccines in India and providing them free of cost to the entire population of the country. Such a feat has not been achieved by any leader in any other nation, the Home minister added. Shah said he was happy that he could come to visit the land of the valiant Indian soldiers who have saved the nation from the aggressors time and again. Paying tributes to the fallen bravehearts, Shah said that the Indian government was all set to safeguard their interests. The grant of ‘One Rank, One Pension’ and the initiation of Agniveer Scheme for recruitment in the Indian forces was a step in that direction, he added. He paid tributes to Major Somnath, the first Param Veer Chakra of Himachal Pradesh for his valiant act on November 3, 1947, in defending the Srinagar airport, was gazetted. This was the first time the honor had been awarded since its inception.

The Home Minister said that the Indian forces did surgical strikes in Pakistan occupied Kashmir to protect the interests of Indian people and the Indian Army.Shah took a dig at the Congress saying the party is full of liars who always try to fool people with false slogans. “Congress forgets to fulfill their promises once the elections are over,” he added. He slammed Rahul Gandhi for not visiting Himachal Pradesh making excuse of his “Bharat Jodo Yatra” that Shah said has no meaning for the common people. Shah said it is the BJP only that has been fulfilling all of its election manifesto vows and thereby helping the people to progress. “India is now known as one of leading nations in the world in the field of development and its related activities,” he said. “Now we manufacture what all earlier used to be imported from the foreign countries by paying them huge money,” he added. Shah hailed Jai Ram Thakur government for its work for welfare and wellbeing of the masses and told the voters that BJP should be allowed to repeat its term.

He exhorted people at the rally not to fall prey to Congress’ and other opposition parties’ evil designs and reject them if they wish to safeguard their own future and strengthen democracy in the country. Shah hailed Modi for his relentless energy to work long hours, and said India needs such persons to rule the nation and the states. He reminded that it is the BJP that abolished Section 370 to provide facilities to all people of Jammu and Kashmir and to live in a peaceful atmosphere. He also reminded them of the grand construction Lord Ram’s temple underway in Ayodhya that will be dedicated to the people in 2024. He reminded them that Modi is a pious man and that is why he has been taking pains in renovating the Hindu temples in Varanasi, Kedarnath, Badrinath and Ayodhya.