BJY is not political but social yatra for cause of ‘Nafarat Chodo Bharat Jodo’: Rajni Patil 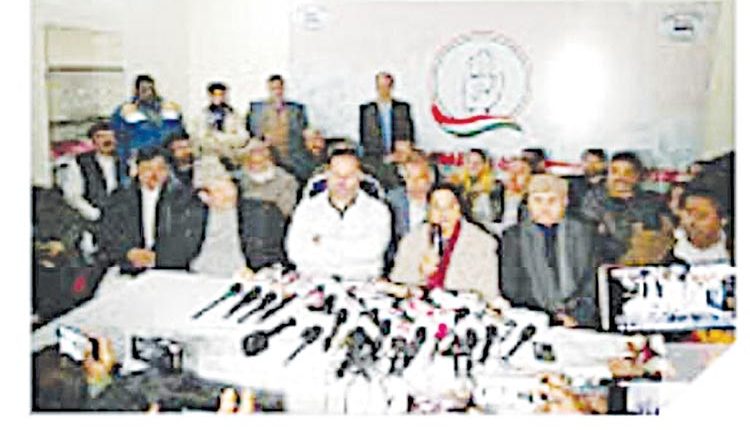 Jammu, Jan 18 (FN Bureau) Stating that Bharat Jodo Yatra is not a political yatra, AICC Incharge J&K Affairs Rajni Patil (MP) said that it is social for the cause of ‘Nafrat Chodo Bharat Jodo’. “It is not a political Yatra but a social yatra for the cause of ‘Nafarat Chodo Bharat Jodo’ besides highlighting sufferings of people and youth from the unprecedented price hike, large scale unemployment and other such local issues of respective states like recent Eviction Orders of the poor people and numerous such issues faced by the people of J&K,” said Patil addressing a press conference here. She said that former J&K Chief Ministers Dr Farooq Abdullah, Omar Abdullah, Mehbooba Mufti, Shiv Sena Leader Sanjay Rout, CPM Leader Mohd Yousaf Tarigami, Muzaffar Shah from ANC and several others will also join the yatra.She said, “it shall be a historical yatra in Jammu and Kashmir too and will culminate in Srinagar on January 30 for which our president Mallikarjun Kharge has invited leaders of 31 political parties.” In response to the query she said that the route plan and everything is being shared with UT administration and security agencies for their advice and perfect coordination, as they too are very concerned regarding the security and life of their leader Rahul Gandhi. Meanwhile as many as 59 leaders from Democratic Azad Party and other parties joined Congress in her presence and she was flanked by PCC President Vikar Rasool Wani and other senior leaders.

They were brought into the party fold by Former PCC President Peerzada Mohd Sayeed, Former Dy CM Tara Chand and Balwan Singh who had recently joined the party in Delhi.Working President Raman Bhalla, AICC Secretary Incharge J&K Affairs Manoj Yadav, Former Union Minister and AICC Observer for Hath Se Hath Campaign Bhartsinh Solanki Ravinder Sharma, Chief Spokesperson were also present on the occasion. Patil while welcoming the leaders said that these leaders whose leave from the party for a short time has already been sanctioned by the party will be given due respect and place in the party.She said that Bharat Jodo Yatra will enter Lakhanpur on January 19 with a night halt there and next day Yatra will start from Hatli Morh to Chadwal (23 Kms.) and stay there.

There shall be break on January 21 and it will resume on January 22 from Hiranagar upto Duggar Haveli Nanak Chack (21 Kms).It will start from Vijaypur upto Satwari on January 23 and night halt at Sidhra. She said that further schedule of the Yatra shall be shared as and when it is cleared by the UT Administration and security agencies. She said that several prominent leaders from different political parties are joining the Yatra. She invited the cooperation of Media for the Yatra and hoped that due coverage shall be given in view of the importance of the yatra. She also said that two press conferences of Rahul Gandhi have been proposed, one each in Jammu and Srinagar, so that the media persons are able to interact with the leader. She added that people of different walks of life are suffering because of the policies of the Govt. can approach for highlighting their problems. President JKPCC Vikar Rasool Wani while welcoming the leaders said that Bharat Jodo Yatra shall be historical in Jammu and Kashmir. He said that all important issues of the people of Jammu and Kashmir shall be highlighted before Rahul Gandhi, while expressing serious concern over the recent eviction drive of the Govt. from the poor and small farmers in occupation of lands for decades.

‘Nation’s economic growth will improve over next 12 months’