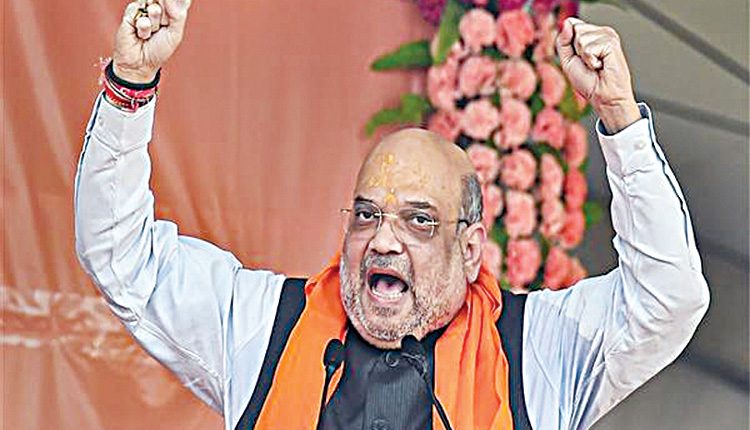 Ranibandh, Mar 15 (Representative) Union Home Minister and senior Bharatiya Janata Party (BJP) leader Amit Shah on Monday said if the party is voted to power it will implement seventh pay commission for West Bengal government employees. Addressing a public meeting here, Mr Shah said, “Mamata Ji has a leg injury, it’s not known how she got it. TMC calls it a conspiracy, but EC says it was an accident.” “Didi, you’re roaming around in a wheelchair, concerned about your leg, but not the pain of mothers of my 130 workers who were killed,” he said. The union minister said under Stand Up India Scheme, the forthcoming West Bengal government will allocate Rs 100 crores to help the tribal community become atmanirbhar He said people voted TMC for ‘Ma Mati Manush’ sarkar, expected political violence to end, but opposite happened. Violence and corruption increased, tribals had to pay Rs 100 for a certificate.

“Bring BJP government, no tribal will have to pay for certificate,” Mr Shah said. “ I am a little late today because of some glitch in my helicopter but I won’t call it a conspiracy,” the union minister added. Earlier in a rally at Jhargram, Mr Shah said with over 200 seats, the BJP is going to form the government in West Bengal under Prime Minister Narendra Modi’s leadership. He said people of West Bengal want a change. The union home minister said West Bengal was once India’s leader and now the state is entangled in “goondaraj”. “Bengal was at one time was India’s leader. It was the hub of education, freedom fighters, religious leadership and more.

The same Bengal is entangled in goondaraj,” the union minister said He further said that the TMC government has taken Bengal to new lows in the last 10 years. “Corruption, political violence, polarisation, Hindus and SC/STs had to go to courts for celebrating their festivals – this is the sort of situation they have brought to the state, ruining development in the state,” the BJP leader said.said. After forming the government in West Bengal, Mr Shah said, “We will build the Pandit Raghunath Murmu Tribal University, in Jhargram for improving opportunities for tribal students.”

Conspiracies cannot stop me; will continue to fight BJP: Mamata