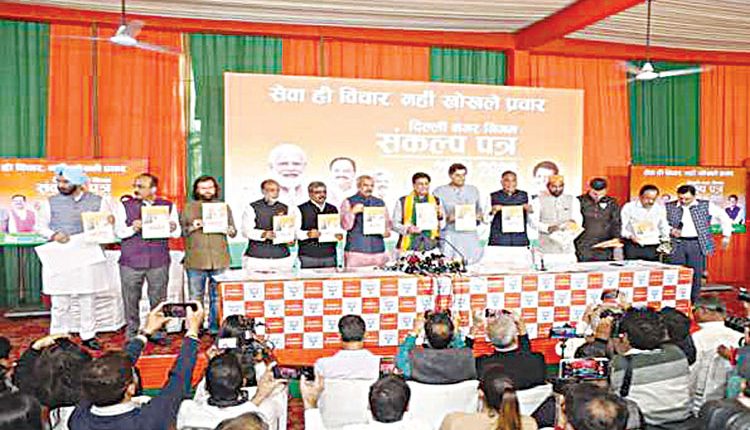 New Delhi, Nov 25 (Agency) Bharatiya Janata Party (BJP) on Friday launched its ‘Sankalp Patra’ manifesto for Delhi MCD polls, promising a plethora of services including flats to every slum dweller in the city. Union Minister Piyush Goyal on Friday released BJP’s party manifesto ‘Sankalp Patra, in the presence of Delhi BJP president Adesh Gupta and other senior leaders. Reading out the 12-point manifesto, Adesh Gupta said all services of the Municipal Corporation of Delhi (MCD) will be brought online through a mobile application. “Hundred per cent of garbage will be processed through waste-to-energy conversion for a green and clean Delhi. Every slum dweller will be provided flats and 17,000 flats are ready for allotment” he said.

The BJP also promises to do away with trade and health licenses, and also abolish factory licenses. He also announced that 50 ‘jan rasois’ run by women will be opened in the city at Rs 5 per meal. “Free cycles will be provided to meritorious girls in MCD schools and all such schools will be upgraded as smart schools by 2027,” Gupta added. The BJP has also promised 1,000 permanent Chhath Ghats and water bodies in all parks, according to the manifesto. The election for 250 wards of MCD will be held on December 4 and the counting of the votes will be taken up on December 7. This will be the first time that a civic election will be held in Delhi after the delimitation exercise. In the 2017 MCD election out of 270 wards, BJP had won in 181 wards, Congress in 27 wards and AAP in 48 wards.