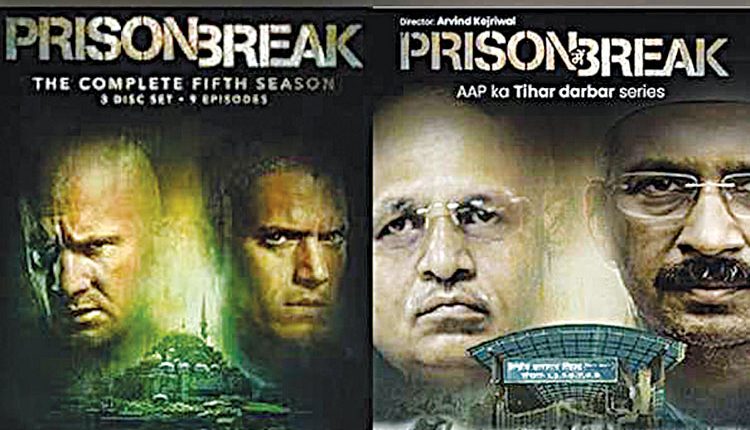 New Delhi, Nov 28 (FN Representative) Delhi BJP has come out with a poster inspired by the popular US TV series “Prison Break” ahead of MCD elections, with an aim to mock its rival AAP over imprisoned jail minister Satyendar Jain. The Aam Aadmi Party (AAP) has been facing political heat over the lavish life being spent by Jain inside the jail, the video clips of which have gone viral on social media. The minister is jailed in a money laundering case. The poster has the faces of Delhi Chief Minister Arvind Kejriwal and Jain, instead of faces of original actors.

Sharing the poster on Twitter, BJP National Spokesperson Shehzad Poonawalla said: “The people of USA watch Prison Break, while in Delhi we are experiencing Prison (mein) Break” (Break in Prison).” The BJP is attacking AAP and Kejriwal over leaked videos of Jain, having a gala time inside the prison. Jain has been serving a prison sentence since May 30, after the economic wing of the intelligence and law enforcement agency arrested him in a money laundering case. The case was filed against Jain and members of his family by the Central Bureau of Investigation (CBI) in 2017. The AAP has countered the allegations of Jain receiving VIP treatment in custody, suggesting that the BJP was simply stirring up controversies ahead of the Delhi civic body polls, scheduled to take place on December 4.