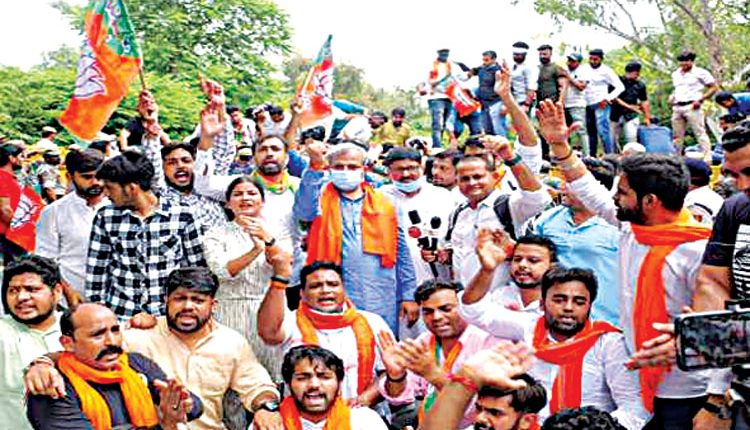 New Delhi Sep 22 (FN Bureau) Delhi BJP on Wednesday staged a demonstration outside Chief Minister Arvind Kejriwal’s residence demanding monthly unemployment allowance for lakhs of unemployed youth in the national capital. Hundreds of protesters being led by Delhi BJP President Adesh Gupta raised slogans against the Delhi government. Addressing the party workers, Gupta said, “Kejriwal is promising to give a monthly allowance of Rs 5,000 to the unemployed in Uttarakhand and Goa, where he is campaigning for upcoming elections. However, he has ignored the youth of Delhi where he has been the Chief Minister for so many years.” He said, “Kejriwal knows how to mislead people in Delhi as till now around 25 lakh unemployed people have not been given any allowance.”

This comes a day after the Delhi CM had announced that if voted to power in Goa, AAP will provide an unemployment allowance of Rs 3,000 per month to the families that have an unemployed youth and Rs 5,000 per month to the families who are dependent on mining and tourism. Earlier during his campaign in Uttarakhand, he had announced that his party will provide allowance to unemployed youth. “Where there is no possibility of AAP forming a government, Kejriwal is promising to give allowance. However, despite living in Delhi for the last seven years, he has not given even a single rupee allowance to any unemployed youth,” Gupta said. He said, “As of now 14 lakh people are registered on the government’s employment portal but in the last seven years only around 400 youths got employed in Delhi. Why there is discrimination against the people of Delhi?”