BJP all set to retain its government in Himachal Pradesh: Nadda 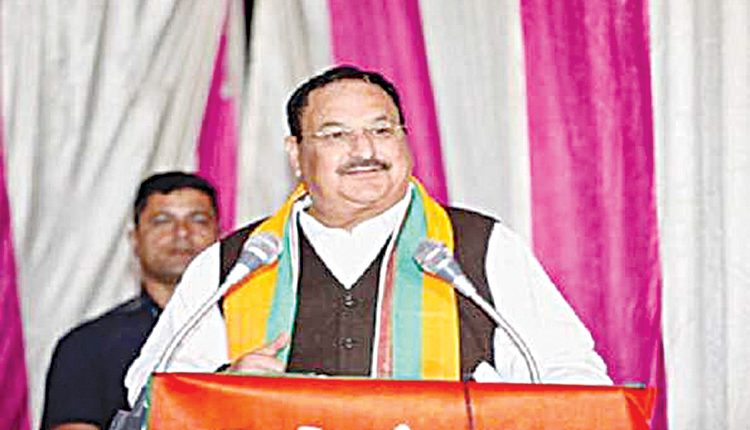 Bilaspur (HP), Nov 3 (FN Agency) All India BJP chief, Jagat Prakash Nadda on Wednesday expressed the firm resolve that the party was going to retain its government in the state with a massive mandate with the help and blessings of the people of the state.While addressing a series of election meetings in Bilaspur district today, Nadda said that people knew that it was the BJP that was their benefactor. “The Congress party always looted them and the state exchequer, the people say, claimed Nadda”. He said,” When I came into politics, sometimes I was called Parla and sometimes called Varla. I said that I am neither Warla nor Parla.”Nadda said every time during the election, a wave of confusion is spread, and sometimes people also get caught in the trap of illusion but you always stood by me, with the Bharatiya Janata Party. I have always been getting your love and I am sure that you will strengthen my trust by forming the BJP government again.No matter how good the plant may be, no matter how many fruits are there in it, if the soil does not do its due, then the plant dries up. Therefore, the soil will have to pay its due in this election.

This election is not for me but for the development of Himachal Pradesh, for the future of the state, he further added.,He said,” In Congress governments, in Bilaspur and Himachal, the Prime Minister used to come only for political tourism. Congress governments neither thought nor worried about here but our Prime Minister Shri Narendra Modi ji always stood with the people of Himachal Pradesh”.Nadda said,” There is no doubt that whenever the BJP government has come to the Center and Himachal Pradesh, development has taken place, but whenever the Congress government has come, the development work has been hampered. So by changing the customs give work to BJP again and make those who stop development works sit in the house”.He alleged that the Congress government had even removed the special status from Himachal Pradesh. Not only this, the industrial package given to Himachal was also withdrawn. It is Prime Minister Shri Narendra Modi ji who restored the special status of Himachal Pradesh.,Nowadays Rahul Gandhi is taking out India Jodo Yatra. This is the same Rahul Gandhi who supported the raising of anti-national slogans in JNU. Rahul Gandhi, who supported those who broke the country to pieces, today went out with the Bharat Jodo Yatra, and this shows the real character and face of the Congress party and Rahul Gandhi.The BJP chief said that one party comes to protect your rights and another party comes to harm your rights.

If the button is pressed correctly, development takes place and if it is pressed in the wrong place even by mistake, there is worry from house to house. If the lotus button is pressed, growth is everywhere; if it is not, there is loss.Nadda said that he had reached here only with the blessings of you people, so I can never hurt your heart. With your love, I contested and won from here many times. A lot of confusion was spread about me but every time you have given a befitting reply to such people in a democratic manner.Nadda said that respected Prime Minister Shri Narendra Modi Ji has a special attachment with Himachal Pradesh. Indira Gandhi laid the foundation stone of a bridge here in 1971, that too after the people’s movement. By the time I became MLA in 1993-94, that bridge was not even a single penny completed. This bridge was completed in 1998, and from there the journey of development started.Nadda said that in the last 5 years, about 6,000 km of rural roads have been built in our government. Himachal Pradesh has received the gift of the Vande Bharat train. The work of the Atal Tunnel was also interrupted by the Congress government, whereas we all know how close this project was to the revered Atal Bihari Vajpayee ji. After the arrival of the respected Prime Minister Shri Narendra Modi, the work on the Atal Tunnel was done at a fast pace and was completed and dedicated to the nation. There is no doubt that whenever the Bharatiya Janata Party government has come to the Center and in Himachal Pradesh, development has taken place, but whenever the Congress government came, the development work has been hampered. So by changing the customs give work to BJP again and make those who stop development works sit in the house.