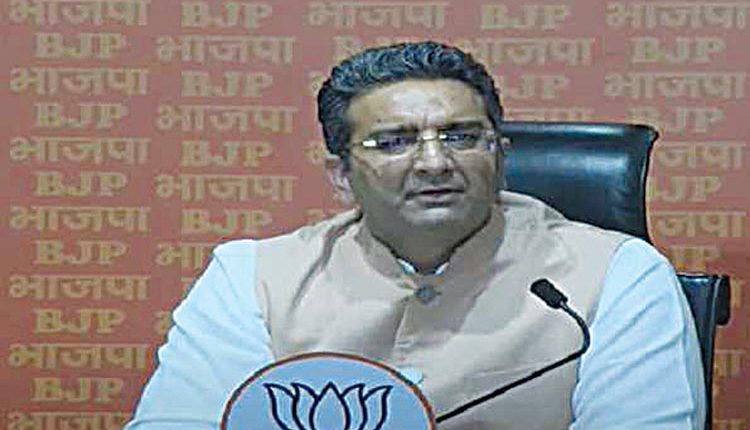 New Delhi, Oct 7 (Agency) BJP on Friday slammed the AAP leader and Minister Rajendra Pal Gautam for his alleged remarks in a religious conservation event in Delhi and demanded his resignation. Addressing a press conference at party headquarters, BJP spokesperson Gaurav Bhatia said the statement made by the Aam Aadmi Party minister has not only hurt the sentiments of Hindus, but has also been an attack on the integrity of the nation. On October 5 AAP Minister Rajendra Pal Gautam attended a public mass religious conversion event.

In the clip, which went viral, thousands can be heard taking an oath denouncing Hindu Gods. where hundreds of people take an oath denouncing Hindu Gods. The AAP Minister, among a thousand others at the event, can be heard taking an oath, saying, “I shall have no faith in Brahma, Vishnu and Maheshwara, nor shall I worship them”. Calling it an insult to Hindus, the BJP spokesperson said,” the the words being spoken in the video make it clear how AAP hate Hinduism and the followers of Hinduism.” Bhatia said, ” in view of the elections, the sentiments of Hindus are hurt at the behest of Kejriwal ji to maintain the vote bank” “Kejriwal ji, how much will you fall for votes?” he added. “We demand the arrest of such a minister who is spreading hatred, who wants to cause riots. Kejriwal ji , you should Immediately sack such minister” he said.

Earlier, the BJP’s Delhi unit tweeted the video, accusing the AAP minister of “spewing venom” against Hindus. “See how Kejriwal’s minister is spewing venom against Hindus. The anti-Hindu face of the electoral Hindu Kejriwal and AAP has come in front of everyone. The public will soon give a befitting reply to the anti-Hindu AAP. Shame on you, Kejriwal,” it tweeted. Rebutting the BJP attack Rajendra Pal Gautam, who serves as the Social Welfare Minister in the Delhi Cabinet said “BJP is anti-national. I have faith in Buddhism, why does anyone have trouble with it? Let them complain. “The constitution gives us the freedom to follow any religion. BJP is afraid of AAP. They can only lodge fake cases against us,” he tweeted.