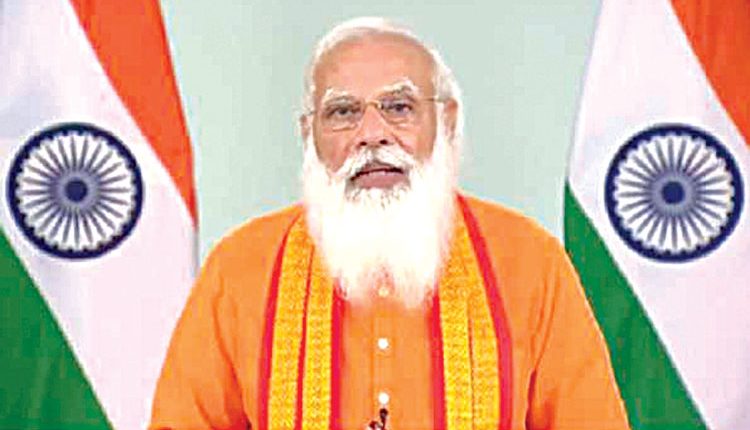 New Delhi, Jun 21 (Bureau) Greeting people on the occasion of 7th International Yoga Day, Prime Minister Narendra Modi on Monday said Yoga shows the way from negativity to creativity. ‘Yoga shows us the way from stress to strength and from negativity to creativity,’ the Prime Minister said while addressing the Yoga Day programme. He said Yoga not only focuses on physical health but also mental health. Mr Modi said in this difficult time of COVID-19, enthusiasm for Yoga has increased multifold.

‘No country was ready for COVID-19 when it got introduced into this world. But Yoga helped us realise that we can fight this virus,’ he said. ‘Doctors, nurses, frontline workers, all came together to realise the power of yoga. They strengthened their and their patients’ immunity with Yoga,’ Mr Modi said. ‘Today medical science equally focuses on healing too,’ the Prime Minister said. He said there are many studies that are happening around Yoga and its benefits. ‘We have seen many schools begin their online classes with Yoga. This is mentally and physically preparing children to fight the pandemic,’ he said. Mr Modi said when India proposed the International Day of Yoga in the United Nations, the spirit behind it was to make this science of Yoga accessible to the whole world.

‘Today, India has taken another important step in this direction along with United Nations, WHO,’ he said. ‘Now the world is going to get the power of the M-Yoga app,’ the Prime Minister said. ‘In this app, many videos of yoga training will be available in different languages of the world based on Common Yoga Protocol,’ he said. Terming this as a great example of fusion of modern technology and ancient science, the Prime Minister expressed the hope that M-Yoga app will help in spreading yoga world over and will contribute to the efforts of ‘One World One Health’. Mr Modi said despite the pandemic, this year’s theme for International Yoga Day –’Yoga for wellness” has raised the morale of people and he wished for health of every country, society and individual and hoped that ‘we will be united and will strengthen each other’.