‘World starts looking at India with a new sense of respect’ 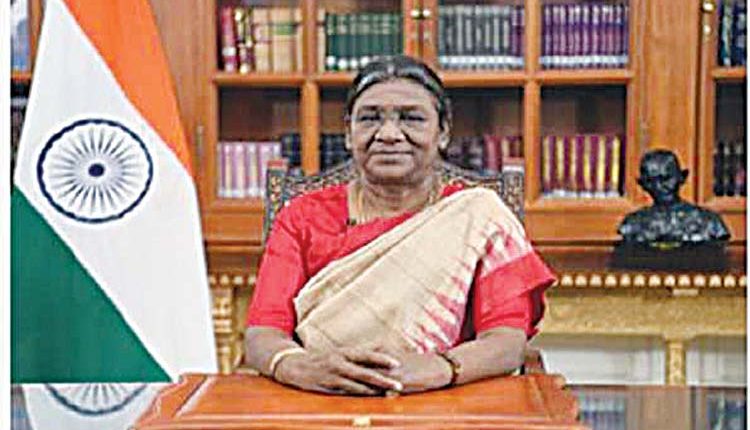 New Delhi, Jan 25 (Mayank Nigam) President Droupadi Murmu on Wednesday said that India has been among the fastest-growing major economies and this could only be possible because of timely and pro-active interventions from the Government. Extending greetings to people on the eve of 74th Republic Day, President Murmu said Last year India became the fifth largest economy in the world this achievement comes against the backdrop of high economic uncertainties around the world. In her first address to the nation, President Murmu said In our mission of ‘Sarvodaya’, the most encouraging has been the progress made on the economic front. She said that the pandemic has entered the fourth year, affecting economic growth in most parts of the world and its initial phase, Covid-19 also hurt India’s economy badly. She however added that Yet, guided by our able leadership and driven by our resilience, we soon came out of the downturn, and resumed the growth saga.

“The ‘Atmanirbhar Bharat’ initiative, in particular, has evoked great response among people at large” she said. The President said that as a result of a series of initiatives in recent years to transform all aspects of governance and unleash creative energies of people, the world has started to look at India with a new sense of respect. Our interventions in various world forums have started making a positive difference. The respect that India has earned on the world stage has resulted in new opportunities as well as responsibilities” she said. Talking about the G20 she said that This year, as you know, India holds the presidency of the Group of 20 nations. With our motto of universal brotherhood, we stand for peace and prosperity of all. “Thus, the G20 presidency is an opportunity to promote democracy and multilateralism and the right forum for shaping a better world and a better future. Under India’s leadership, I am sure, G20 will be able to further enhance its efforts to build a more equitable and sustainable world order” she said.

“In the early years of Independence, we faced countless challenges and adversities. Very high levels of poverty and illiteracy were just two of the many ill-effects of the long foreign rule. Yet, the spirit of India was undeterred” she said. She said that ” We have succeeded as a democratic republic because so many creeds and so many languages have not divided us, they have only united us. That is the essence of India”. Highlighting the schemes of the Government, she said that , “It is a matter of great satisfaction that those on the margins have also been included in the schemes and programmes and they have been helped in tiding over difficulties.” “By implementing the ‘Pradhan Mantri Garib Kalyan Anna Yojana’ announced in March 2020, the Government ensured food security for poor families at a time when the country was facing economic disruption in the wake of the unprecedented outbreak of COVID-19” she said. Touching upon the education policy 2020, the president said that, As education builds the right foundation for this purpose, the National Education Policy has introduced ambitious changes. “The policy makes our civilizational lessons relevant for contemporary life, while also preparing the learner for the 21st century challenges. The National Education Policy appreciates the role of technology in expanding and deepening the learning process” she added. Talking about the space mission she said, The ‘Gaganyaan’ program to carry Indian astronauts into the space is under progress. This will be India’s maiden human space flight. Yet, even as we reach out to the stars, we keep our feet on the ground”.

India’s Mars Mission was powered by a team of extraordinary women, and our sisters and daughters are not far behind in other areas too” She said. Raising concerns over that global warming and Climate Change, the president said thay, To my mind, global warming and climate change are the most pressing among them. Global temperatures are rising and incidents of extreme weather are increasing. ” We are faced with the dilemma: To lift more and more people out of poverty, we need economic growth, but that growth also comes from fossil fuel. Unfortunately, the poor bear the brunt of global warming more than others”. “Developing and popularising alternative sources of energy is one of the solutions. India has taken a commendable lead in this direction by giving a policy push to solar energy and electric vehicles”she said. The President said at the global level, however, emerging economies need a helping hand from advanced nations in the form of technology transfer and financial support. She said we need to modify our lifestyle if we want our children to live happily on this fragile planet. One of the changes suggested pertains to food. ” I am happy to note that the United Nations accepted a suggestion from India and declared 2023 as the International Year of Millets. Millets were essential ingredients of our diet and they are making a comeback among sections of society” President Murmu said.