‘Water conservation is form of service to country’ 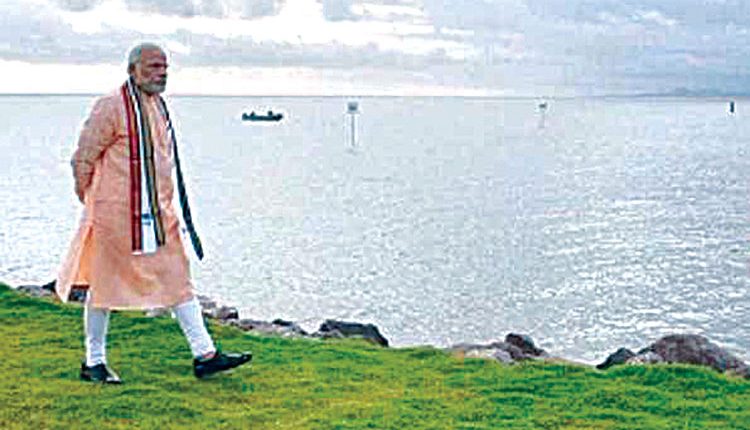 New Delhi, Jun 27 (Bureau) Prime Minister Narendra Modi on Sunday stressed that there should be a focus on water conservation during the monsoon season. Addressing the 78th edition of his monthly radio broadcast – ‘Mann Ki Baat’, Mr Modi said the monsoon season has also arrived in the country. ‘When the clouds rain, they rain not only for us, but also for the generations to come! Rain water also collects in the ground, it also replenishes the water level of the ground. And that’s why I consider water conservation as a form of service to the country,’ the Prime Minister said. Citing an example of Satchidanand Bharti of Pauri Garhwal, Uttarakhand, Mr Modi said, ‘Bharti ji is a teacher and he has imparted very good education to the people through his deeds.

Today, due to his hard work, the huge water crisis in the Ufrainkhal area of Pauri Garhwal has come to an end. Where people used to pine for water, today there is continuous supply of water throughout the year.’ The Prime Minister said in the hills there exists a traditional method of water conservation, which is called ‘Chalkhal’. That is, it involves digging a big pit to collect water. ‘Bharti ji also added some new methods to this tradition. He regularly got small and big ponds dug.

Due to this, not only the hills of Ufrainkhal turned green, but the problem of drinking water of the people was also solved. You will be surprised to know that Bharti ji has got more than 30 thousand such water tanks constructed. 30 thousand! This monumental work of his continues even today and is inspiring many people,’ Mr Modi said. The Prime Minister further said that the people of Andhav village in Banda district of Uttar Pradesh have also made an innovative effort and have given a very interesting name to their campaign – ‘Khet ka pani khet mein, gaon ka pani gaon mein’ (‘Water of field in the field, water of village in village’).

Under this campaign, high bunds have been raised in several hundred bighas of fields of the village, Mr Modi said. ‘As a result rain water started collecting in the field, and started percolating into the ground. Now, these people are also planning to plant trees on the bunds of the fields. That is, now farmers will get all three – water, trees and money! As it is the village is getting recognized far and wide due to its good work,’ the Prime Minister said. ‘Taking inspiration from all of these efforts, we can also conserve water around us, in whatever way possible… we should save it. We must not to miss this crucial period of the monsoon season,’ Mr Modi said.