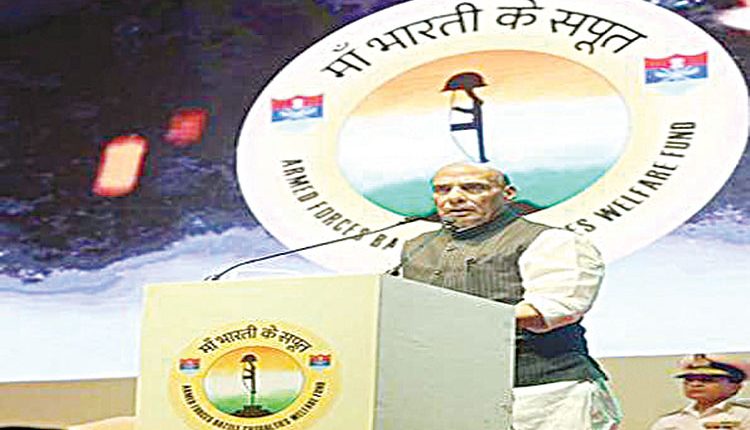 New Delhi, Oct 14 (FN Agency) Defence Minister Rajnath Singh on Friday launched a dedicated website ‘Maa Bharati Ke Sapoot’ (MBKS) to enable the countrymen to contribute towards Armed Forces Battle Casualties Welfare Fund at a function at National War Memorial Complex. Armed Forces Battle Casualty Welfare Fund is a Tri service fund, which is utilised for grant of immediate financial assistance of ex-gratia to the families of soldiers, sailors or airmen who lay down their lives or get grievously injured in active military operations.

Amitabh Bachchan, who has been made the Goodwill Ambassador of the initiative, has expressed his gratitude towards the families of the fallen heroes and exhorted citizens to come forward and contribute to the fund. Addressing the gathering, Defence Minister Rajnath Singh appealed to contribute generously to the fund and support the families of Indian bravehearts. “We must come forward with a ‘big’ and ‘open’ mind to fulfill our responsibility towards the security of our nation. It is our ‘moral’ and ‘national’ obligation,” the Defence Minister said. “As responsible citizens, it becomes our moral duty to do something for those who have done so much for us.

With a sense of gratitude, a sense of dedication, a sense of belongingness, one should try to do as much as possible for our soldiers and their families,” the Minister added. Informing about the initiative, the Defence Ministry said that while the Government has initiated a large number of Welfare Schemes for the soldiers killed or disabled during active military operations in the line of duty, there has been a strong public sentiment and requests from patriotic citizens, corporate heads/ industry captains, to contribute to the cause of welfare of the soldiers and their families. The website was launched to facilitate patriotic Indians to partner in the noble cause. There is no upper limit of contribution towards this fund. Defence Minister Rajnath Singh also felicitated the Next of Kins of the fallen Heroes and disabled soldiers during the event. Parents and relatives of many War decorated soldiers also graced the occasion. The Army Battle Casualties Welfare Fund (ABCWF) came into existence following an avalanche incident in Siachen Glacier on February 3, 2016 in which the Indian Army lost 10 soldiers. The incident saw an outpouring of national sentiment and flow of donations and later resulted in creation of the Fund on April 1, 2016. Besides Defence Minister Rajnath Singh, three Service Chiefs and Member of Parliament Col Rajyavardhan Singh Rathore, the function was also attended by three former Army Chiefs Gen VP Malik, Gen NC Vij and Gen Dalbir Singh Suhag.