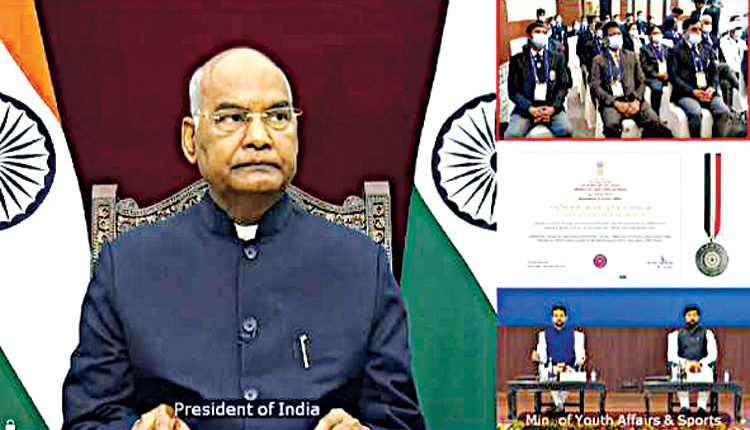 New Delhi Sep 24 (Agency) President Ram Nath Kovind on Friday conferred the National Service Scheme Awards (NSS) for the year 2019-20 from Rashtrapati Bhawan through virtual mode. The awards were given in 3 different categories like University/ +2 Councils, NSS Units and their Programme Officers and NSS Volunteers. Out of 42 awards 14 awards were given to girls for “their exemplary work for society”. Minister for Youth Affairs and Sports Anurag Thakur and Minister of State Nisith Pramanik were also present during the ceremony at Sushma Swaraj Bhawan in New Delhi. Congratulating the awardees President Ram Nath Kovind said, “India is called a young country and 35 percent of its population is young so today, I congratulate all the awardees for their contributions to the society,” “Developing the personality and character of students through voluntary community service is the main objective of the award,” he said.

The President said, “A society that provides opportunities to women in every walks of life as per their wishes and capabilities is called a progressive society,”. “I am very happy today that 14 girls were chosen for these awards, which gave me a great sense of pride,” he added. “The ideological orientation of the NSS is inspired by the ideals of Mahatma Gandhi,” Kovind said. NSS is a central sector scheme which was launched in 1969. The Ministry of Youth Affairs & Sports, Department of Youth Affairs confers every year the National Service Scheme Award to recognize and reward outstanding contributions towards voluntary community service made by the Universities, Colleges, Councils, Senior Secondary, NSS Units, Programme Officers and NSS Volunteers.