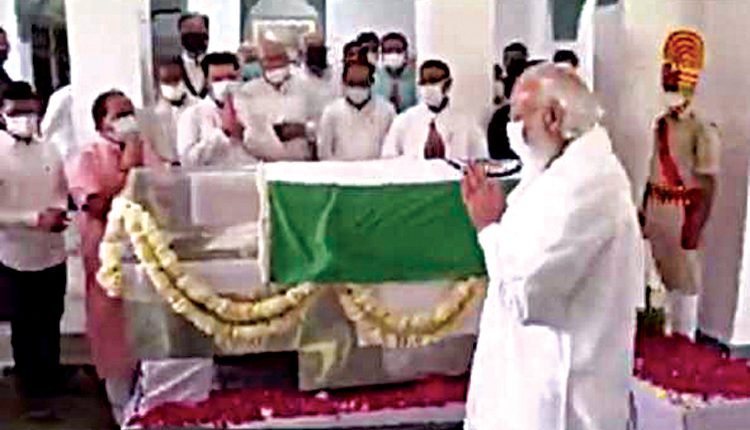 Lucknow, Aug 22 (FN Agency) Prime Minister Narendra Modi paid his last respects to former Uttar Pradesh chief minister Kalyan Singh here on Sunday. “Kalyan Singh ji made ‘Jan Kalyan’ mantra in his life. He worked for the welfare of people and party, PM said after laying wreath on the mortal remains of the leader at his residence here. “ We have lost a valuable and effective leader and it is irreparable. Lord Ram should given him space on his feet and courage to the family members to bear the loss,” he said. After paying his respect, PM met with the family members of Kalyan Singh, including his MP son Rajveer Singh and state minister grandson Sandeep Singh, and consoled them.

PM was accompanied by UP Governor Anandiben Patel, Chief Minister Yogi Adityanath, BJP president J P Nadda and state party president Swantra Deo Singh. His last rites will be performed on Monday. A three-day state mourning has been declared in Uttar Pradesh, and August 23, the day of cremation will be a public holiday. Singh, 89, was undergoing treatment in the intensive care unit of the Sanjay Gandhi Post Graduate Institute of Medical Sciences (SGPGIMS) in Uttar Pradesh’s capital Lucknow since July 4. His condition had started deteriorating since Friday.