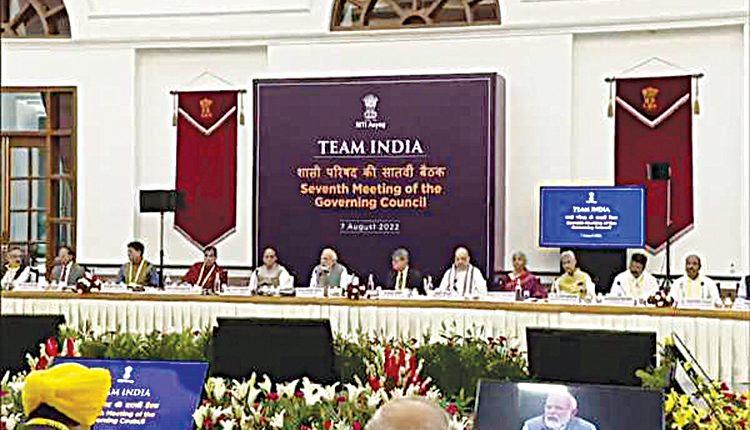 New Delhi, Aug 7 (Representative) In order to exchange views on key policy related issues between Centre and States, Prime Minister Narendra Modi chaired the seventh Governing Council meeting of NITI Aayog on Sunday at Rashtrapati Bhawan Cultural Centre here. According to Niti Aayog, the meeting will pave the way for synergies towards a new era of collaboration and cooperation between Centre and States/ Union Territories. The forum provides an opportunity for the Centre and States to exchange views on key policy related issues aimed at strengthening India’s growth trajectory. As India commemorates 75 years of Independence, there is a reinforced need for the states to be agile, resilient and self-reliant and move towards AatmaNirbhar Bharat in a spirit of cooperative federalism, Niti Aayog said. “The agenda of the meeting, interalia, includes crop diversification and achieving self-sufficiency in oilseeds and pulses and agri-communities; implementation of the National Education Policy–school education; implementation of the National Education Policy–higher education; and urban governance,” Niti Aayog added.

As part of preparations for the meeting, the National Conference of Chief Secretaries held in Dharamshala in June 2022 which was the culmination of the six month long rigorous exercise by the Centre and States. The conference was chaired by the Prime Minister and attended by the Chief Secretaries of all States and UTs, along with senior officials of the Central and State Governments. The 7th Governing Council Meeting will endeavour to finalize a roadmap and outcome oriented action plan on each of the above themes, Niti Aayog said. This would be the first in-person meeting of the Governing Council since July 2019.It is particularly important as we enter Amrit Kaal against the backdrop of the Covid-19 pandemic and in light of India hosting the G20 Presidency and summit next year, Niti Aayog said.

The meeting would also lay emphasis on the importance of the Presidency for India for the federal system and the role that states can play in highlighting their progress at the G-20 Platform. NITI Aayog’s Governing Council is the premier body tasked with evolving a shared vision of national priorities and strategies with the active involvement of States and Union Territories.The Governing Council presents a platform to discuss inter-sectoral, inter-departmental and federal issues. It comprises the Prime Minister of India; Chief Ministers of all the states and union territories with legislature; Lt Governors of other UTs; Ex-Officio Members; Vice Chairman, NITI Aayog; Full-Time Members, NITI Aayog; and Union Ministers as Special Invitees. According to Niti Aayog, the Council provides one of the most important forum for deliberations between the Centre and States and identifying key strategies for cohesive action with a whole-of-Government approach.