Need to encourage more girls to come forward in the field of technical education: President 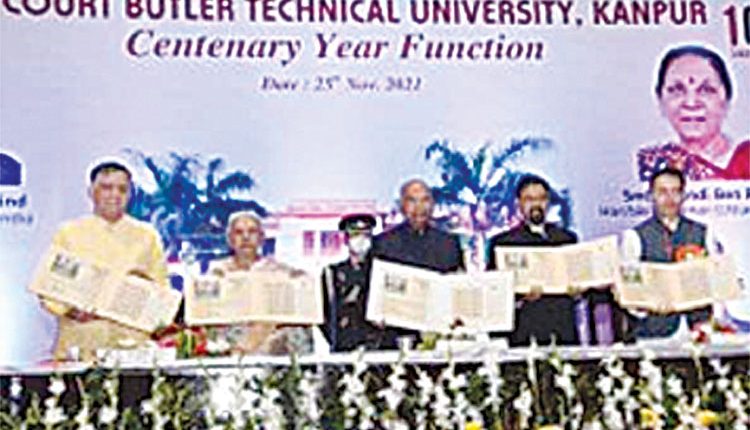 Kanpur, Nov 25 (FN Agency) President Ramnath Kovind, while pointing out the low number of girl students in technical education, said on Thursday that today the need of the hour is to encourage more and more girls to come forward in the field of technical education which will also help boost women empowerment. The President said he had attended convocations of many educational institutions across the country where he observed that the performance of girls was very impressive. But in the field of technical education participation of girl students is not satisfactory, he added. Mr Kovind was addressing the centenary celebrations of the Harcourt Butler Technical University here on Thursday.

Emphasizing on the need of innovation and technology development in India, the President said that only those countries in the world remain in the forefront, which give priority to innovation and new technology and continuously enable their citizens to face the challenges of the future. “Our country has also increased its credibility in the field of technology but we still have a long way to go. In this context, the role of institutions like HBTU becomes important,” he said. He said that our technical institutions should inculcate spirit of innovation and entrepreneurship in their students. Students should be provided such an environment from the very beginning in which they can contribute to the development of the country by becoming a ‘job giver’ instead of a ‘job seeker’. President said institutions like HBTU should inculcate spirit of innovation and entrepreneurship in their students. He said that HBTU has been recognized for its contribution in the fields of oil, paint, plastic and food technologies. The glorious history of this institution is linked to the industrial development taking place in India since the beginning of the 20th century. The technology and human resources provided by HBTU has been instrumental behind the fame of Kanpur as ‘Manchester of the East’, ‘Leather City of the World’ and ‘Industrial Hub’.

The President said that when HBTU is celebrating its centenary, the country is celebrating Azadi Ka Amrit Mahotsav to commemorate 75 years of independence. And in the year 2047, when the country will be celebrating the centenary of independence, HBTU will be completing its 125 years. Pointing to the current ranking of HBTU in the National Institutional Ranking Framework (NIRF) which is at 166th, the President said that it should be the endeavor of all stakeholders of HBTU that by the year 2047, this university should be ranked among the top 25 institutes of the country. He emphasized that to achieve this goal they have to work with determination. He was confident that all stakeholders would make every effort to take HBTU and the country to new heights. Referring to the Swachh Survekshan Awards 2021 held in New Delhi last Saturday, the President noted that in the Swachh Survekshan among the urban bodies of the country, Kanpur city jumped to 21st place in 2021 from 173rd in 2016. He said that he knew people of Kanpur. If they decide to do something, they achieve it. He urged them to make the goal of cleanliness of the city a mass movement. He expressed confidence that the administration and municipal corporation of Kanpur would take inspiration from Indore city, which is consistently ranked first in the country in cleanliness, and make efforts to rank Kanpur in the five cleanest cities of the country. After attending the HBTU function President left for Delhi after his two fays visit to Kanpur.