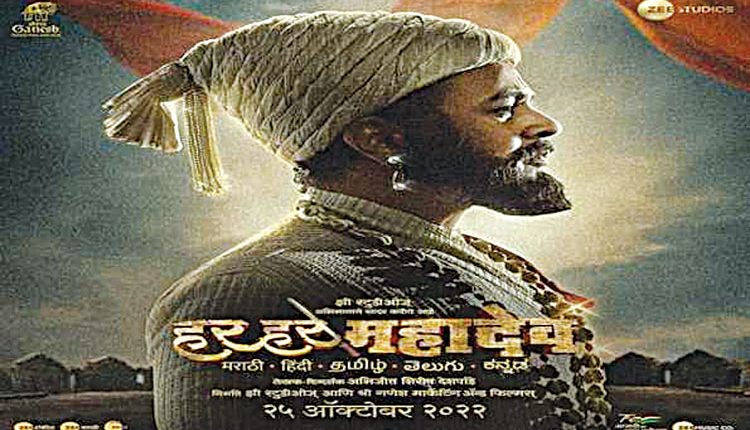 New Delhi, Oct 19 (FN Agency) The highly anticipated Diwali surprise from ZEE Studio’s- ‘Har Har Mahadev’ is only a week away from its release and the audience can not wait to watch the story of brave and heroic Maratha warrior Baji Prabhu Deshpande.Subodh Bhave, who will be seen playing the role of Chhatrapati Shivaji Maharaj has a very interesting tale to share. The actor who is often seen nailing the roles in every biopic he takes spoke about how he preserved the sanctity of his role.He also talked about how director Abhijit Deshpande used to fall at his feet every time he came dressed up as Chhatrapati Shivaji Maharaj. “Whether you are a good actor or not, the audience decides after watching the film. But before that, the most important thing when you play a character is that you have to preserve the sanctity of the role. Acting comes later.

Whenever I used to come on the set dressed as Chhatrapati Shivaji Maharaj, our director Abhijit Deshpande would come first and fall at my feet, ” Subodh said in a statement.”My producers would also fall at my feet whenever they were present on the set. But they fell at the feet of Chhatrapati Shivaji Maharaj and not of Subodh Bhave. You should learn to respect the character you are going to play and the costume that the character wears. When you respect that outfit, you also respect the person wearing it and their thoughts,” he added. ‘Har Har Mahadev’ narrates a very strong and inspirational story of a real battle which was led by Bajiprabhu in our history, where only 300 soldiers fought off the 12000 enemy army and won, albeit paying for the victory with their lives, on the other hand, it will be available to the mass audience across the nation being Marathi cinema’s first multilingual film. Produced by ZEE Studios and Directed by Abhijeet Deshpande. The film stars Subodh Bhave, Sharad Kelkar, Amruta Khanvilkar and Sayli Sanjeev in the leads. The film is all set to hit the theatres on October 25.