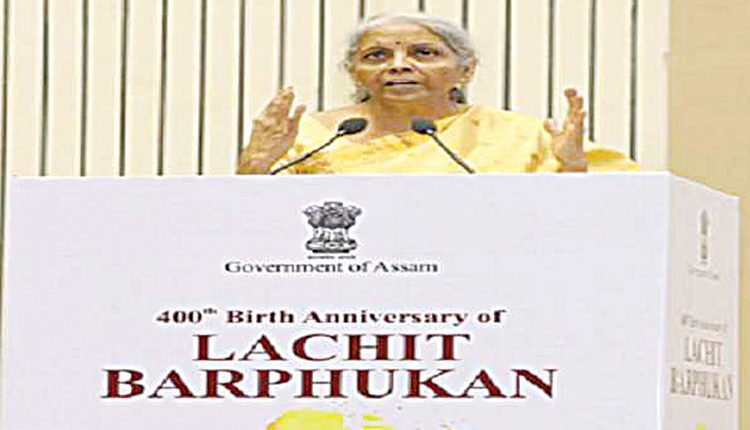 New Delhi, Nov 23 (Mayank Nigam) Union Minister Nirmala Sitharaman on Wednesday made a veiled attack at the previous Congress governments and said “in Indian history we did not see a fair share given to many who made remarkable contributions for the country”. “In 70 years, we have not had a fair share of history for those who deserved to be mentioned,” Sitharaman said in her address on the inaugural day of a three-day programme marking the 400th birth anniversary of great warrior Lachit Barphukan. Calling Barphukan, “a total patriot “, who knew how he had to give his best to protect his motherland, the minister said: “The Ahom soldier and the commander-in-chief, Lachit Barphukan, ensured the safety of Assam”. “Assam and its people have made remarkable contributions for the motherland. The Ahoms had been extraordinary. Assam and its neighbourhood were kept safe from invasions. Withstanding 17 attempts at invasions into Assam is not easy at all,” she said. Sitharaman added, “The way in which the Ahom dynasty preserved Assam, it has also served as a great fortification which protected the entire South East Asia from ruthless invasions, ending their advance at its threshold.”

Lauding the Assam government for its initiative to remember the great patriot, Sitharaman said, “This is a splendid attempt at showcasing the not so well remembered North East. Such events are important for our future generation.” “I am extremely impressed by the culture of Assam to keep recorded history over the century in different modes. Through various ways the history have been recorded.” She also urged the Ministry of Culture to join hands with Government of Assam to gather the history of the great warrior across the country and also spread it. Earlier, Assam Chief Minister Himanta Biswa Sarma in his address said that if the Ahom had not crushed the Mughal aggression, the entire cultural map of South East Asia would have been different today. “The Indian history recognised the history of Mughal emperors. But it has failed to recognise the longest ruled kingdom of the South and NE. India was not about the Mughals, it was about the so many other kings who ruled with strength and affection,” he said. “Indian history has ignored our heroes. It has ignored Lachit Barphukan,” he claimed. Sarma expressed hope that this campaign of the Assam government will put Ahom Dynasty in proper perspective. “Indian history will recognise India had better kings than Aurangazeb,” he said.

CEC should act even against the PM, if there is some allegation against him even; SC observes

Will contest 2024 LS poll from Kannauj in UP: Akhilesh