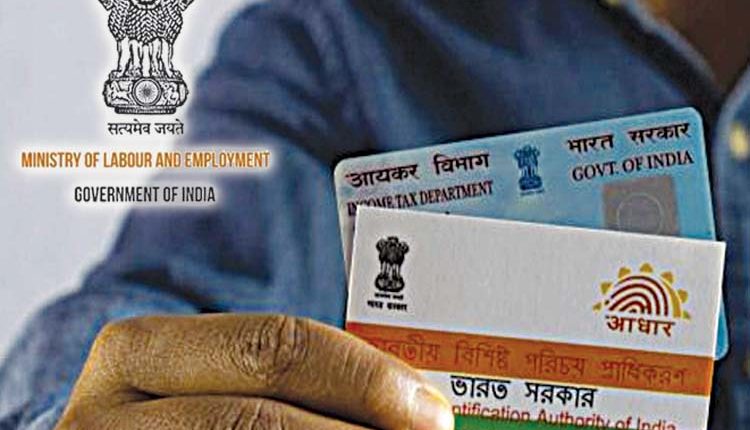 New Delhi, May 5 (Bureau) The Ministry of Labour & Employment has now been mandated to seek the 12-digit unique identification number Aadhaar from people like employees and unorganised sector workers seeking registration, benefits, availing services or receiving any payment under various schemes under the Social Security Code 2020. Aadhaar would not be made mandatory for delivery of services under various social security schemes under the purview of the ministry because Social Security Code 2020 has not been fully implemented so far. The rules under the Code are finalised by the ministry but those rules are yet to be notified. The main purpose of the latest mandate given to the ministry is to facilitate database creation, mainly covering people in informal sectors like migrant workers.

‘Now, we will start asking for Aadhaar numbers from beneficiaries under the Social Security Code. This is also required for our database for unorganised sector workers, including migrant workers. However the delivery of services under various social security schemes would not be denied due to non-submission of Aadhaar,’ Labour Secretary Apurva Chandra told PTI. In this regard, a notification was issued by the ministry on May 3, which mandates the ministry and bodies working under it to seek Aadhaar number from the beneficiaries under the Social Security Code. The Code was passed last year by Parliament. ‘… the central government hereby appoints the 3rd day of May, 2021 as the date on which the provisions of section 142 of the said Social Security Code shall come into force,’ the notification said. Section 142 provides for establishing the identity of an employee or an unorganised worker or any other person through Aadhaar number for seeking benefits and availing services under the Code.

The Social Security Code 2020 will subsume nine labour laws. They include The Employee’s Compensation Act, 1923; The Employees’ State Insurance Act, 1948; The Employees’ Provident Funds and Miscellaneous Provisions Act, 1952; The Employment Exchanges (Compulsory Notification of Vacancies) Act, 1959 and The Maternity Benefit Act, 1961. The other laws that will be subsumed are The Payment of Gratuity Act, 1972; The Cine-Workers Welfare Fund Act, 1981; The Building and Other Construction Workers’ Welfare Cess Act, 1996 and The Unorganised Workers Social Security Act, 2008. In a statement on Wednesday, the ministry said the notification of the section will enable it to collect Aadhaar for the database of beneficiaries under the various social security schemes. According to the statement, the National Data Base for Unorganised Workers (NDUW) is at an advanced stage of development by the National Informatics Centre. The portal is aimed at collection of data for unorganised workers, including migrant workers, for the purpose of giving benefits of the various schemes of the government. An inter-state migrant worker can register himself on the portal on the basis of submission of Aaadhar alone. Section 142 under the Social Security Code has been notified only for collection of data of workers, including migrant workers. No benefit will be denied for want of Aaadhar, the statement said.