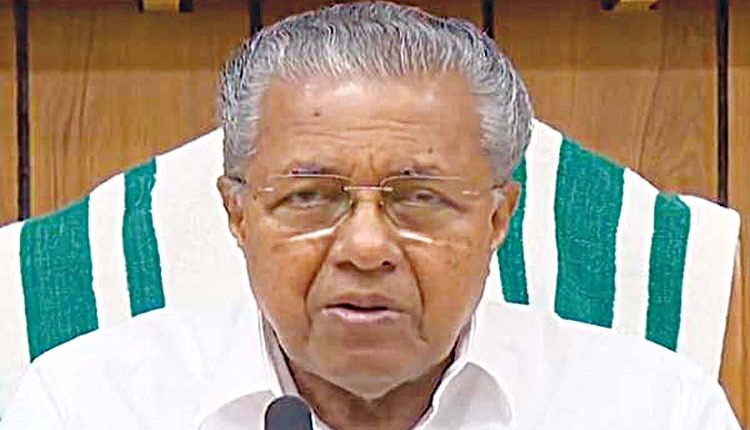 Thiruvananthapuram, Oct 28 (Representative) As per the crimes in India in 2021, Kerala has a total conviction rate of 86.5 per cent in IPC Crimes and 99.3 per cent in Special and Local Laws, Chief Minister Pinarayi Vijayan has said. “We have a policy of ensuring registration of every single crime reported. As a result, over 5.2 lakh FIRs were registered in 2021,” the Chief Minister said on Thursday. The focus of the Government in Kerala has been to consciously strive towards creating a Police force that is service oriented, citizen friendly one that caters to the requirements of a modern democratic society, he said. All police stations in Kerala have been designated as Janamaithri (Community Policing) Police Stations. This has statutory backing through the Kerala Police Act. This has ensured that the police has a people-friendly face. The police and the public are equal partners in ensuring public safety. Towards developing a people friendly attitude for police, Government of Kerala has taken stringent action against instances of custodial violence and torture. We have a policy of zero-tolerance in this regard. “Our Government believes that the success of the Police depends on how its treats its vulnerable population- women, children, transgenders and Schedule Castes and Scheduled Tribes. “The Emergency Response Support System needs to be enhanced with mobility and technological resources so that more effective interventions in respect of women’s safety can be undertaken.

“Government of India may seek to provide specific financial assistance for the same. We have introduced child friendly police stations to cater to the specific needs of children. “The Student Police Program, now a nationally acclaimed model, which aims at creating a future citizenry with the right ideals, values and leadership skills.Similar comprehensive measures in respect of laws like the Code of Criminal Procedure may be considered.Keeping in mind that drug abuse is one of the most serious challenge, we have recently embarked upon the program ‘Yodhavu’, where all departments of the Government collectively work towards eradicating drug use. The effort has been to attack the source of high end drugs. We solicit assistance of the Government of India, and organisations like the NCB in countering this menace.With increasing occurrences of extreme climatic events, the Police Force need to be equipped to conduct emergency operations with cooperation of civil defence volunteers. Technical help for training police personnel in disaster management is urgently need. “We give importance to use of modern technology. We have Cyber Crime Police Stations in each range, Hi-Tech Cell at the state level and cyber cells at all district centres, which are now the pillars on which this infrastructure is now built. cOcOn, the annual cyber security conference organised by Kerala Police is now into its fifteen edition.” “We have also developed a dark web monitoring tool in-house in partnership with our cyber volunteers. Our state of the art Drone Forensic Lab has developed a Counter drone vehicle ‘Eagle Eye’ recently.””We have embarked upon an effective program of modernisation of the infrastructure of the Police force.Government of Kerala has provided plan funds amounting to more than Rs 150 crore for modernisation schemes of Police.

“The yearly allocation under the Central Scheme is only Rs 30 crore. We require substantial additional help from the Centre to make Kerala Police, a completely modern force.However, the current scheme allocation of approximately Rs 32 crore under the MoPF scheme is not sufficient to meet the demands of modernisation of the police force. Government of India may positively consider enhancing the same.Further, large investments are required to ensure sufficient housing, modern policing infrastructure and sufficient mobility for effective police response. It is necessary that the MoPF is expanded to include these items as well.Coastal Security is an important component of national security in Kerala.The coastal security scheme has been implemented in the state in three phases. In phases I and II, 18 Coastal police stations have started working in Kerala, and seven more police stations are proposed in the III phase. The significant achievement of the scheme is the Kadalora Jagrati Samiti – a community policing partnership to counter threats from the sea. We have also started a campaign involving Government Departments including Police and the public for preventing drug abuse. The Government of India needs to consider a separate scheme for upgradation of Forensic Science Laboratories so that they meet required standards. “Finally, we also believe that effective training is an essential ingredient of our improvement process. Towards this end, we have revised both the content as well as the methodology of police training.” “Most of the recruits into the police force are extremely well-educated, whose skill sets have to be exploited for better police performance.” “While the State has undertaken various measures, Government of India’s valuable help is requested for improvement of infrastructure, enhanced tools of technology and providing modern training to police personnel.”

Dhauli peace pagoda continues to spread message of peace for all time to come: Naveen