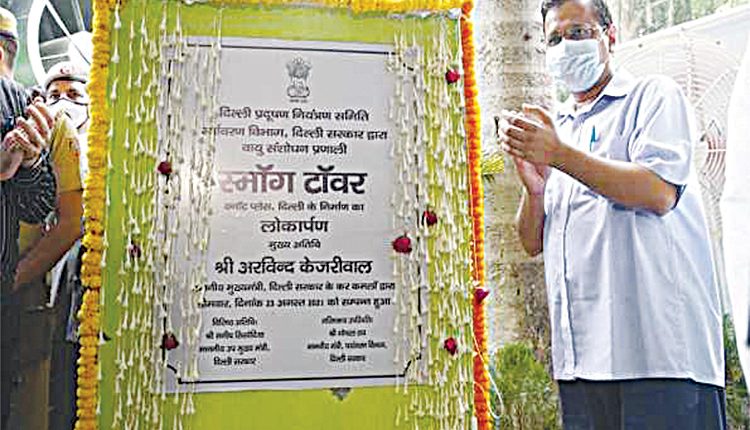 New Delhi, Aug 23 (FN Representative) Delhi Chief Minister Arvind Kejriwal inaugurated the country’s first-ever smog tower in the National Capital on Monday. The over 20-metre-tall structure has been set up in the Connaught Place area to improve the air quality in a radius of around 1 km. “To fight pollution, we have installed India’s first smog tower in Delhi today. It can help clean air within a one-kilometre range. It has been installed on an experiment basis and data from it will be analysed by IIT-Delhi and IIT-Bombay,” said Kejriwal after the inauguration event. The officials said that the tower is on a pilot run where a study will be undertaken to ascertain its effectiveness during the period.

“A control room has been set up at the site to monitor the operations of the smog tower,” a senior official associated with the project informed. The tower is estimated to clean 1000 cubic metres of air every second, helping reduce PM 2.5 and PM 10 levels in the area, he added. Meanwhile, the officials at the Central Pollution Control Board (CPCB) said that another such structure, a 25-metre-tall smog tower, is being constructed at Anand Vihar and expected to become operational by August 31. The CPCB is the nodal agency for the tower at Anand Vihar, while the Delhi Pollution Control Committee is the nodal agency for the one at Connaught Place.