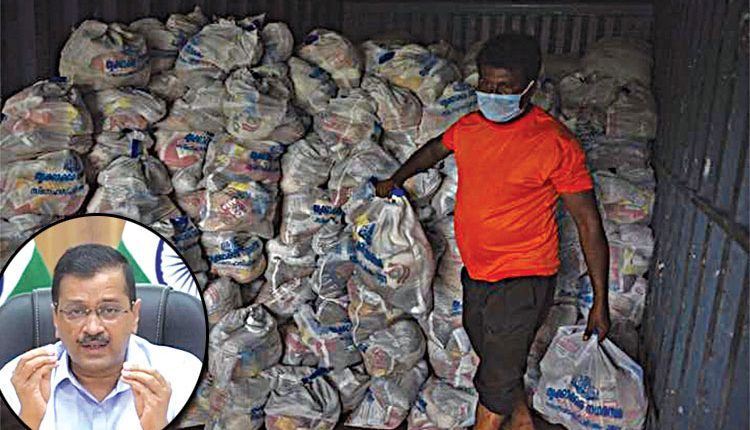 New Delhi, Jun 6 (FN Agency) Chief Minister Arvind Kejriwal on Sunday appealed to Prime Minister Narendra Modi to lift the blockade on the doorstep delivery of ration scheme initiated by the Delhi government, saying the scheme was in the interest of the nation. Addressing a digital press conference here, Mr Kejriwal questioned the Prime Minister and the Central government on the reasons behind rejecting the doorstep delivery of the ration scheme initiated by the Delhi government. ‘Delhi’s Doorstep Delivery of Ration Scheme was about to begin next week and all arrangements had been made to do so. However, just two days before this revolutionary scheme was to be launched, it was nipped in the bud,’ he said.

Mr Kejriwal said, ‘If Pizza can be home delivered, burgers can be home delivered, smartphones and clothes can also be home-delivered, then why should ration not be delivered to the houses of the poor?’ ‘For the last 75 years, the poor of this country have been victimised by the ration mafia, they have been made to stand in long queues,’ Mr Kejriwal said. The Delhi Chief Minister said, “It is said that the connections of this ration mafia are very high. In the 75 years till date, no government has dared to end this mafia. For the first time, a government has come to Delhi which has shown this courage. If this house-to-house ration system was implemented, then the ration mafia would have ended. But look how powerful this ration mafia turned out to be. This plan was to be implemented in Delhi from next week and a week ago, they got it rejected.” Mr Kejriwal urged the Centre not to stop the doorstep delivery of ration scheme.

Vindicating the Delhi government’s stance, Mr Kejriwal added that it has sought the Central Government’s approval five times and had accepted all the suggestions of the Centre and removed the words ‘Mukhya Mantri’ from the scheme, but even then the Centre is raising objections. Mr Kejriwal added that the Central government has said that the scheme is being stopped due to a court case involving ration shopkeepers in the High Court, but neither has the HC stayed the scheme, nor has the Centre had put forward any objection in court. He further said the doorstep delivery of ration scheme should be implemented across the country during the ongoing COVID-19 situation. ‘I think in Delhi and even elsewhere this scheme of door-to-door delivery of ration should be implemented, it will also help prevent the spread of the Coronavirus. These shops are super spreaders. The overcrowding at ration shops will be avoided,’ he said.