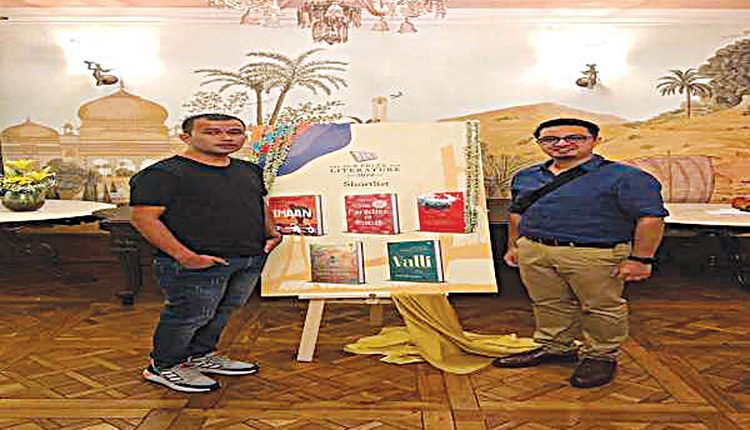 New Delhi, Oct 22 (Representative) In its 5th year, the JCB Prize for Literature Saturday announced its 2022 Shortlist at the Glenburn Penthouse, Kolkata in an intimate gathering of authors, translators and the literary community of the city. The JCB Prize for Literature is presented each year to a distinguished work of fiction by an Indian author, as selected by the jury. The Jury Chair, AS Panneerselvan, unveiled the Shortlist at the Kolkata event. The shortlisted novels are translations from five different languages including Urdu, Hindi, Bangla, Malayalam and Nepali, with 2 debut novelists on the list. Following the unveiling, Jayant Kriplani, Paramita Saha and Sandip Roy read passages from the shortlisted titles. The shortlisted novels are:1. Imaan by Manoranjan Byapari, translated from the Bengali by Arunava Sinha (Eka)2. The Paradise of Food by Khalid Jawed, translated from the Urdu by Baran Farooqi (Juggernaut)3. Valli by Sheela Tomy, translated from the Malayalam by Jayasree Kalathil (Harper Perennial)4. Tomb of Sand by Geetanjali Shree, translated from the Hindi by Daisy Rockwell (Penguin Random House India)5. Song of the Soil by Chuden Kabimo, translated from the Nepali by Ajit Baral (Rachna Books) Commenting on the shortlist, the chair of jury 2022, AS Panneerselvan said “Judging literature is a challenge. From exploring new content and deploying various literary devices, authors constantly try to push the boundary. Every step is crucial and every innovation is precious. However, when the final evaluation happened, these wonders of the mind gave space to the power of the heart, where empathy became the criteria for creating the shortlist.

All the novels in the shortlist exemplify the idea of empathy, concern for fellow humans, and in a sense a worldview in which the head does not subsume the heart.” The JCB Prize titles are present across bookstores in the country and is also available in an online store on Amazon. Pragya Sharma, Director, Media Business, Amazon India said, “We at Amazon are delighted to be associated with the JCB Prize for Literature since its inception. Together, we are committed to nurturing the passion for reading in the country. India is home to many different languages and diverse cultures that produce a plethora of high-quality literature. The JCB Prize has consistently, over the last 5 years, been a trustworthy & prestigious source for recognizing these distinguished works of fiction by Indian writers and Amazon India is excited to bring these gems to readers across the country and beyond.” With the winner to be decided next month, Mita Kapur, Literary Director, said, “The fact that in the 5th year of the JCB Prize for Literature we have the most diverse shortlist yet, fills us with hope. This is a list that brings forth the many Indians across time and geography. This is truly representative of the spectrum of languages, authors and publishers that make up our industry, but most of all it represents the quality of excellent writing that India has to offer.” Talking about the prize, each of the five shortlisted authors will receive Rs 1 lakh; and if a shortlisted work is a translation, the translator will receive an additional Rs 50,000. The winner of the Rs 25 lakh JCB Prize for Literature will be announced on November 19, 2022. If the winning work is a translation, the translator will receive an additional Rs 10 lakh.

Shortlisted books: Jury comments, Synopses and Author Biographies: Imaan: Manoranjan Byapari, translated by Arunava Sinha (Eka)The Jury says: Imaan is a completely novel iteration of the humanist tradition of Bengali literature. It presents a vivid portrait of people from the periphery but is neither voyeuristic nor patronising. Each character has agency no matter how circumscribed their life may be. A raw, deeply authentic and honest story which is also well-paced, poignant and eloquent. Synopsis: Imaan entered Central Jail as an infant—in the arms of Zahura Bibi, his mother, who was charged with the murder of his father and who died when he was six. He left twenty years later, having spent his time thus far shuttling between a juvenile home and prison. With no home to return to, Imaan ends up at the Jadavpur railway station, becoming a ragpicker on the advice of a consummate pickpocket. The folk of the railside—rickshaw-pullers, scrap dealers, tea-stall owners, those who sell corpses for a little bit of money—welcome him into their fold, but the world of the free still baffles him. Life on the platform is disillusioning and far more frightening than the jail he knew so well. This free world too is a prison, like the one he came from, only disconcertingly large. But no one went hungry in jail. And everyone had a roof over their heads. Unable to cope in this odd world, Imaan wishes to return to the security of a prison cell. He is told that, while there is only one door out of prison, there are a thousand through which to return. Imaan—whose name means honesty, conscience—is he up to the task? Written in Manoranjan Byapari’s inimitable style, where irony and wry humour are never too far from bitter truths, this new novel is a searing exploration of the lives of the faceless millions who get by in our towns and cities, making it through one day at a time.

Author: Manoranjan Byapari was born in the mid-fifties in Barishal. After he migrated to West Bengal at the age of three, he lived in two refugee camps before he moved away at the age of fourteen to work. At twenty-four, he became politically active with the Naxals after meeting famous labour activist Shankar Guha Niyogi. It was in prison that Byapari taught himself to read and write. Later, when he was working as a rickshaw puller, he had a chance encounter with Mahasweta Devi who asked him to contribute to her journal Bartika. He has since then published eight novels, four volumes of memoirs and over fifty short stories. His essay Is there Dalit writing in Bangla which was translated into English by Meenakshi Mukerjee for Economic and Political Weekly launched him into mainstream prominence. He worked until recently as a cook with the Helen Keller Institute for the Deaf and Blind in West Bengal. He won the 2019 Hindu Prize For Non-Fiction for his biography Itibritte Chandal Jiban translated into English as Interrogating My Chandal Life: An Autobiography of a Dalit. Translator: Arunava Sinha translates Bengali fiction and nonfiction into English. Fifty-one of his translations have been published so far. Twice the winner of the Crossword translation award for Sankar’s Chowringhee (2007) and Anita Agnihotri’s Seventeen (2011), respectively, he has also won the Muse India translation award (2013) for Buddhadeva Bose’s When The Time Is Right. He has been nominated for the Independent Foreign Fiction prize and the Best Translated Book award in the US. He is a recipient of an English PEN translation grant for Sangeeta Bandyopadhyay’s The Yogini. Besides India, his translations have been published in the UK, the US, and in several European and Asian countries. He has conducted workshops at the British Centre for Literary Translation, UEA; University of Chicago; Dhaka Translation Centre; and Jadavpur University. He is an associate professor of practice in the Creative Writing department at Ashoka University.

Must continue to act against terror: India on Pak’s removal from FATF grey list