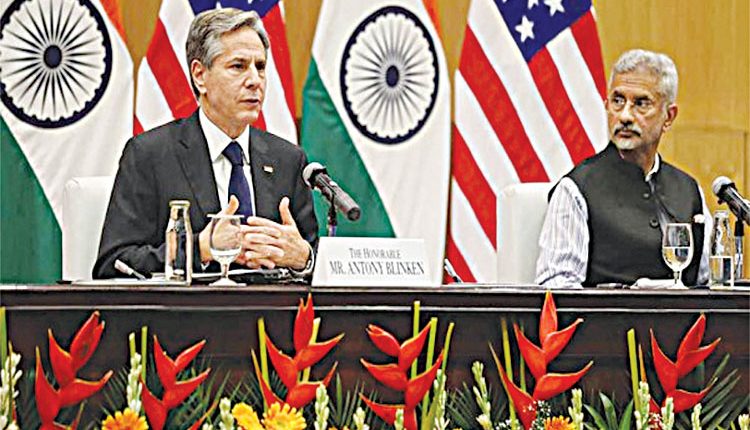 New Delhi, Jul 28 (Representative) India and the US on Wednesday held talks on seeing a stable and peaceful Afghanistan, taking forward the Quad, tackling terrorism and the Covid pandemic, as well as on democracy, as External Affairs Minister S Jaishankar met visiting US Secretary of State Antony Blinken here. Blinken, who left in the evening after calling on Prime Minister Narendra Modi, held talks with Jaishankar and earlier met National Security Advisor Ajit Doval. Addressing a joint presser with Blinken, EAM Jaishankar said the talks between the two sides had focused on regional issues, especially on Afghanistan where the US troops are pulling out.

“Regarding Afghanistan, it is essential that the peace negotiations are taken seriously by all parties. The world wishes to see an independent, democratic, sovereign and stable Afghanistan, at peace with itself and with its neighbours. “But its independence and sovereignty will only be ensured if it is free from malign influences,” the EAM said, in an oblique reference to Pakistan and its harbouring of militants on the Afghan border. “Afghanistan must neither be home to terrorism, nor a source of refugees. Afghanistan must never be home to terrorism,” he emphasised. Blinken said that the rapid advances of the Taliban and the atrocities perpetrated by them are “deeply troubling”. He said, “There can be no military solution to the conflict in Afghanistan”, adding that the Afghan resolution requires that the Afghan government and the Taliban come to the negotiating table. “Any future government has to be inclusive of the Afghan people and be Afghan-led and Afghan owned-process,” he added. On terrorism, Jaishankar said that both countries have been working together on countering terrorism, bilaterally and multilaterally, and both are “convinced” that the world will never accept cross-border terrorism.

“Countering terrorism has been the common endeavor for us in the UN framework, bilaterally and in other bodies. We are convinced that the world will never accept cross border terrorism,” Jaishankar said. On the Quad or the Quadrilateral Security Dialogue — a strategic dialogue between the US, Japan, Australia and India to discuss economic and military cooperation, Blinken emphasised that the grouping is “not a military alliance”, and is aimed to further cooperation on regional challenges while “reinforcing international rules”. “Its purpose is to advance cooperation on regional challenges while reinforcing international rules, values that we believe together underpin peace, prosperity, security in the region. We’re doing it together and with cooperation with other countries, including the ASEAN and other like-minded partners,” the US top diplomat said. China, which has been increasing its footprint in the South China Sea and the Indo-Pacific region, has termed the Quad security dialogue as the new NATO aimed against Beijing. China is forming a rival quadrilateral grouping along with Russia, Pakistan and Iran. Tackling the Covid pandemic was a major topic between the two sides. Blinken announced that Washington was providing an additional $25 million to India towards boosting vaccination across the country, besides the $200 million provided earlier to tackle the pandemic.

Expressing gratitude for the help rendered by India to fight the pandemic last year, he said: “We remember with gratitude and we will not soon forget the aid and assistance that India provided to us in the early days of Covid-19 when our hospitals were overwhelmed with the pandemic. Blinken arrived on Tuesday evening on a two-day visit. He is the third top Biden administration official to visit India this year.