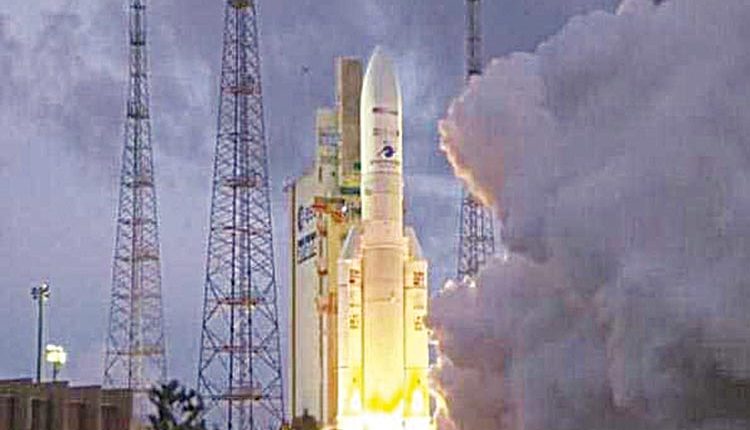 The launcher carried a total payload of approximately 10,863 kg. NewSpace India Limited (NSIL) under the Department of Space (DoS)undertook the GSAT-24 satellite mission as its 1st Demand Driven missionpost space reforms. NSIL has leased the entire satellite capacity to M/s Tata Play, a leader in DTHservices. Thanks to this satellite, Tata Play will be able to offer better andreliable services to its customers. GSAT-24 is a Ku-band 4-tonne class communications satellite built for NSILby ISRO. This satellite will provide high-quality television, telecom munications and broadcasting services and will meet the DTH needs of Indian customers.Configured on ISRO’s proven I-3k Bus with a mission life of 15 years, GSAT-24 is the 25th indian satellite to be launched by Arianespace and the 11th of the GSAT series.Arianspace said carrying out its first mission of the year, and the 113th overall, Ariane 5 once again demonstrates its exceptional reliability. Mission VA257 will improve broadband coverage in the Asia-Pacific region andrepresents another commercial success for Ariane 5 in the Asia-Pacific market. “After the successful launch of the James Webb Space Telescope, this newachievement helps Ariane 5 write a new chapter in space history”, said AndréHubert Roussel, CEO of ArianeGroup.

“Ariane 5 demonstrates its reliability once again, justifying the trust of Arianespace’scustomers worldwide. Its successes are tied to Ariane 6, which benefits from the same reliability along with increased competitiveness and versatility”, he said.The Ariane 5 heavy-lift launcher is an ESA program carried out in cooperation between public institutions and industry across 12 European partner states. Ariane Group is the lead contractor for the development and production of Ariane 5, and is responsible for campaign operations and preparation of the launch vehicle up to lift-off. ArianGroup hands over a “ready to fly” rocket to its subsidiary Arianespace, whichsells the Ariane 5 and operates it from the Guiana Space Center in French Guiana.During launch campaigns, Arianespace works closely with CNES, who is the design authority for the Ariane 5 and controls the satellite preparation facilitiesat the CSG. After this launch, four Ariane 5 vehicles remain before the Ariane 6 takes up thebaton, supporting Europe’s institutional missions, while meeting the growing needs of the commercial market.