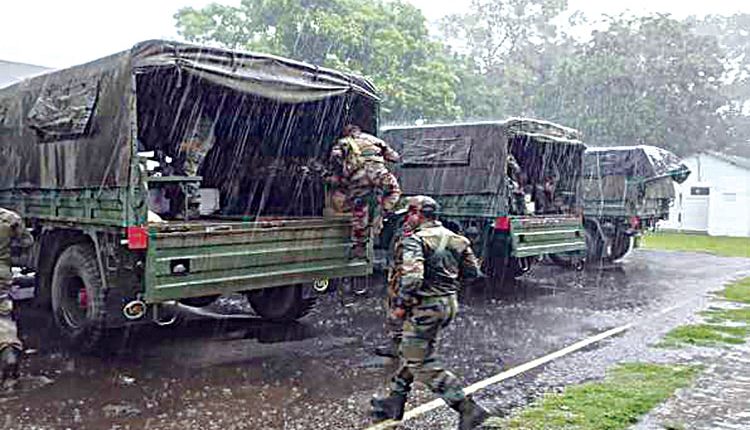 New Delhi, May 25 (FN Bureau) Indian Navy on Tuesday said that its rescue teams have already deployed at costal places in West Bengal and Odisha in view of severe cyclonic storm Yaas which will start its landfall on Wednesday morning. As part of the preparation, two ‘Navy Diving Teams’ and five ‘Flood Relief Teams’, comprising specialised Navy personnel with associated equipment and inflatable boats, have been deployed in the state.

“One Diving and two Flood Relief Teams each have been positioned at Digha and Frazerganj on 23 May and 24 May respectively. One Flood Relief Team has been kept on standby at Diamond Harbour, for redeployment as necessary, at short notice”, the Navy spokesperson Commander Vivek Madhwal said. These teams are equipped to undertake casualty evacuation of stranded/ marooned personal, road clearing/ tree cutting operations, and distribution of relief material, as would be required by the local District Administration, he added.

In addition to these, the Navy is also positioning Humanitarian Assistance and Disaster Relief (HADR) Material for about 500 people at its Depot Centre at Kolkata, for subsequent distribution if required, in the aftermath of the Cyclone. Four Naval Ships, loaded with HADR material, Medical Teams and additional Diving Teams, would also closely follow the Cyclone and be available for rendering further assistance, Commander Madhwal further said.
Naval Helicopters from onboard the Naval Ships, Medium-Range Maritime Patrol aircraft at Visakhapatnam as well as Long Range Maritime Patrol Aircraft at Arrakkonam (Tamil Nadu) are also ready for deployment at short notice in the aftermath of the Cyclone for Casualty Evacuation, Aerial Survey and Airdrop of Relief Material, based on requests from the State Government, as required , he added.