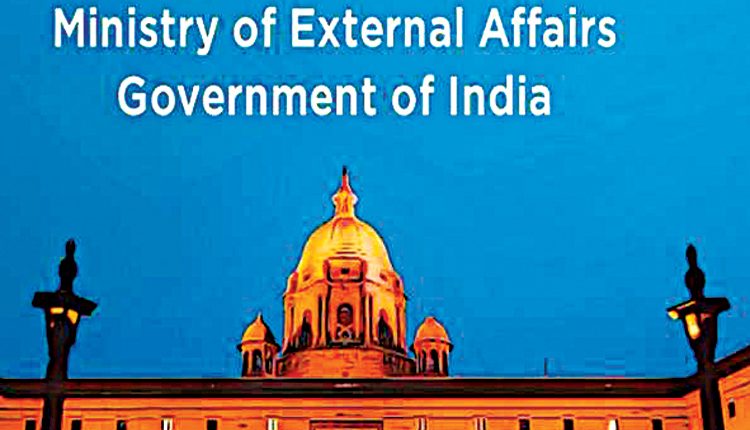 New Delhi, Nov 30 (Bureau) India on Tuesday summoned the Pakistani Charge D’Affaires to convey “deep concern” over the incident of desecration of the sanctity of the Kartarpur Gurudwara by a Pakistani model and a clothing brand. The Pakistani senior diplomat was conveyed that “this reprehensible incident has deeply hurt the sentiments of the Sikh community in India and worldwide”. “Such continued incidents of desecration and disrespect of places of religious worship of the minority communities in Pakistan highlight the lack of respect for the faith of these communities,” it was conveyed, said Ministry of External Affairs spokesperson Arindam Bagchi in a statement. “It was further conveyed that we expect Pakistani authorities to sincerely investigate this matter and take action against those involved,” he said.

On Monday, Sikhs and others in India protested over a Pakistani fashion model posing with her head uncovered and with her back to the revered Kartarpur Sahib Gurdwara in Pakistan, forcing the Pakistani fashion brand Mannat to apologise for posting the pictures. Following the protests on social media, Pakistan Information Minister Fawad Chaudhry demanded that the model tender an apology for the disrespect. “The Designer and the model must apologise to Sikh Community #KartarPurSahib is a religious symbol and not a Film set…..” he tweeted. Manjinder Singh Sirsa, President, Delhi Sikh Gurdwara Management committee and spokesperson Akali Dal, in tweets said that modelling in front of the Kartarpur Sahib Gurdwara, one of the holiest shrines in Sikhism where the founder of Sikhism Guru Gobind Singh spent his last years, is an act of desecration. He also wrote a letter to External Affairs Minister S Jaishankar demanding intervention in the matter by the Government of India. Sirsa said: “Modelling at Sri Kartarpur Sahib is Desecration.

Pak Court issued Arrest Warrant of star who did dance video at Mosque; same must be done against this woman from Lahore as example of treating all religion at par. “Otherwise, any talk of respect for Sikhism is hollow @GovtofPakistan” “Such behaviour and act at pious place of Sri Guru Nanak Dev Ji is totally unacceptable! “Can she dare to do the same at her religious place in Pakistan? @ImranKhanPTI.” “@GovtofPakistan should take immediate action to stop this trend of treating Sri Kartarpur Sahib as picnic spot by Pakistani people. “We demand strict action against those models and agencies of Pakistan who disrespect the sanctity of Sri Kartarpur Sahib,” he posted. In his letter to EAM Jaishankar, Sirsa said that this is not the first time that the sanctity of the Kartarpur gurdwara has been desecrated. He said there have been complaints from Sikh devotees of people using the gurdwara as a picnic spot, or to shoot Tik Tok videos wearing indecent attire which hurts the sentiments of the Sikh community. R P Singh: National Spokesperson BJP in a tweet said: “Gurdwara in Kartarpur is a place of religious pilgrimage not a tourist spot. It has certain codes (Rehat Maryada) to adhere to. People visiting Gurdwaras can’t go bare headed, can’t smoke, …..Violation hurt sentiments. Pls have the codes notified,” he said tagging the Pakistan Prime Minister Imran Khan. Mannat Clothing took to Instagram on Monday to apologise for the misunderstanding, and stated that it was not their intention to hurt any religious sentiment and that the pictures were sent to them by a third party blogger.