India, Russia to have 2+2 talks: Commit to a democratic Afghanistan 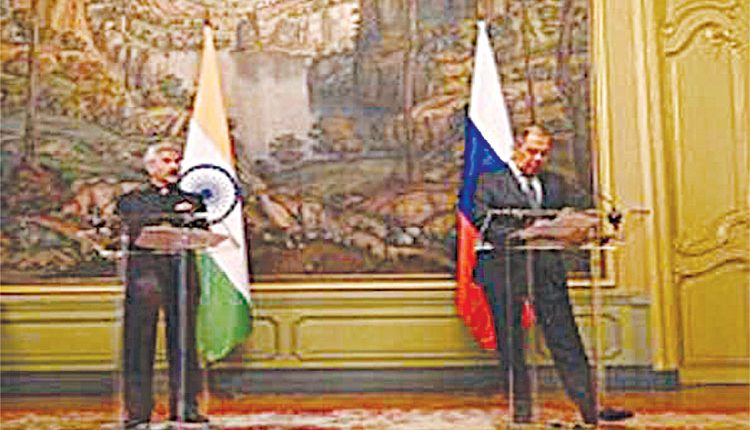 New Delhi, July 9 (FN Bureau) India and Russia on Friday agreed to hold 2+2 talks involving foreign and defence ministers later this year, adding a new dimension to their steady and multi-dimensional relationship. External Affairs Minister S Jaishankar held a “warm and productive” conversation in Moscow with his Russian counterpart Sergey Lavrov on the multi sectoral ties between the countries. “The quality of conversation reflected our Special and Privileged Strategic Partnership,” tweeted Jaishankar later.

Both reviewed preparations for bilateral Annual Summit that will take place this year and cooperation at the UN and other fora. “A new dimension that has been added to our relationship is the agreement to hold 2+2 dialogue of foreign and defence ministers. We feel that we should do this sometime later this year,” Jaishankar said at a joint press conference after the meeting. He and Lavrov also had an “open” and wide-ranging discussion on regional and global issues such as Afghanistan, Iran, Syria, Libya, the Caucasus; ASEAN and the Indo-Pacific. Afghanistan, as expected, was the prime focus of the talks between the foreign ministers. “Afghanistan occupied a lot of our attention because it has a direct implication on regional security.

We believe that the immediate need of the day is really a reduction in violence and if you have to see within Afghanistan and around Afghanistan,” Jaishankar said. On Thursday, the Russian foreign ministry said that the two sides would compare notes on “major global and regional issues, including the political process in Afghanistan, settlement in Syria [and the] situation around the Iranian nuclear programme”. Friday’s discussion took place hours after President Joe Biden announced that the US drawdown from Afghanistan will conclude on August 31. “It is important for India and Russia to work together to ensure that much of the progress we have seen in economic, democratic and social terms are maintained. We are both committed to an independent, sovereign, united and democratic Afghanistan,” the EAM said after the talks.

The military-political situation in Afghanistan has deteriorated over the practically complete withdrawal of the Western coalition forces led by the US from the country. Afghan Army Chief General Wali Mohammad Ahmadza, who was newly appointed to this post by President Ashraf Ghani, has said that the priority of the Afghan forces is to protect the country’s main cities, border crossings, and highways from the Taliban. Jaishankar and Lavrov compared notes on Afghanistan. The EAM stressed the point that whoever governs the country has a legitimacy aspect to it “which can not and should not be ignored. “We have both been victims of fundamentalist thinking and know well the dangers of radicalization and extremism. As pluralistic societies, we must be especially on guard against the revival of such forces,” he said. Earlier, the EAM reviewed economic cooperation with Deputy Prime Minister Yury Borisov, co-chair of India-Russia Inter-Governmental Commission-TEC. Both took stock of engagement in trade and investment, connectivity, energy, transport and Science & Technology.

We are in ‘collectivity’ during Pandemic, together we need to strengthen Public Sector