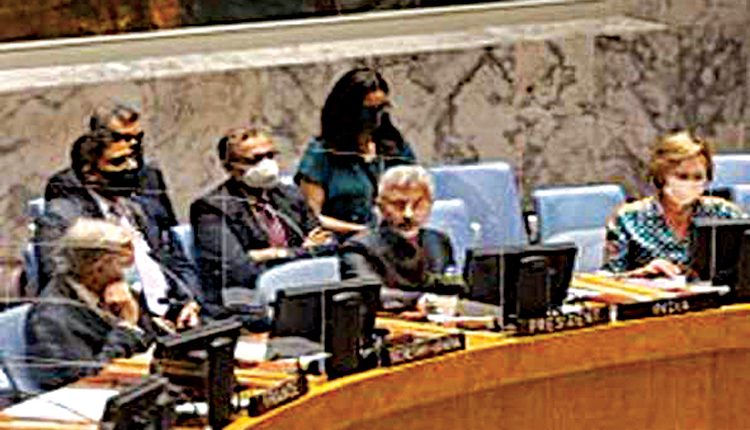 United Nations, Aug 18 (FN Bureau) India believes in walking the talk when it comes to the safety and security of UN peacekeepers, External Affairs Minister S Jaishankar said on Wednesday, as he announced the rollout of the UNITE Aware Platform for effective coordination and monitoring of UN Peacekeeping operations and also the signing of an MoU with the UN in support of Partnership for Technology in peacekeeping operations. Chairing the United Nations Security Council Open Debate on Technology and Peacekeeping, during India’s month-long presidency, Jaishankar also announced a four-point framework for peacekeepers to meet contemporary threats. He said that UN peacekeeping “simply cannot afford to cede the information advantage to actors determined to undermine prospects for peace” through the use of modern technology to aid their violent cause. He said that since 1948, UN peacekeeping missions have continued to operate in challenging settings, which could involve armed groups, non-state actors and terrorists. “Because the nature of peacekeeping missions and their attendant threats have become more complex, it is vital that our capabilities to secure the peacekeepers keep pace. We owe it to them to ensure that our protective efforts meet the highest standards.”

He said in recent years, UN peacekeepers have experienced a greater level of asymmetric threats, ranging from landmines to IEDs “and we cannot remain indifferent to this prospect”. The four point framework he outlined are: First, to focus on operationally proven, cost-effective, widely available, reliable, and field-serviceable technologies. Second, the need for a sound information and intelligence foundation, which will ensure early warning and mobilizing of a coherent and early response. “A reliable, high fidelity means to collect, use, process and share information and data will create advantages from the very start of peacekeeping missions. Precise positioning and overhead visualization of mission environments is critically important to provide intelligence and enhance the safety and security of mission personnel,” he said. “It, therefore, gives me great pleasure to announce that India is supporting the UN in the rollout of the UNITE Aware Platform across select peacekeeping missions.

This initiative is based on the expectation that an entire peacekeeping operation can be visualized, coordinated, and monitored on a real-time basis. We should ensure that any attack on a peacekeeper or a civilian is predictable, preventable, or responded to immediately.” Third, contribute to ensuring that technological improvements are continuous and are available on the ground—in terms of the gear that peacekeepers carry and the weapons and tools that they use, and also to strengthen communication within missions and enhance the capacity to make informed decisions at the tactical or operational level. Fourth, consistent training and capacity building of peacekeepers in the realm of technology needs attention and investment. “It is with this in mind that India is committed to long-term engagement with the UNC4ISR Academy for Peace Operations in Entebbe, Uganda, to meet the training needs, link it with available technological capability, and shape future requirements. “I am pleased to announce that we have signed an MOU between the Government of India and the UN in support of the ‘Partnership for Technology in Peacekeeping’ initiative and to UN C4ISR Academy for Peace Operations (UNCAP),” he announced.

He said India would welcome other Member States to take active interest in this evolving paradigm. “Political will, strengthened partnerships, and shifts in organizational culture are required to take it forward.” He also said that as part of the outcome from the discussions, the Council has adopted a Resolution on ‘Accountability of Crimes against UN Peacekeepers’ as well as a Presidential Statement on ‘Technology for Peacekeeping’, the first such UN Security Council document on this topic. “Peacekeeping continues to play a crucial role in India’s vision of ensuring international peace and security. Providing greater clarity, direction and professionalism in our UN Peacekeeping operations is at the heart of this vision,” Jaishankar said. He said India has been a pioneer in UN Peacekeeping, deploying more than a quarter of a million troops over the years in as many as 49 UN Peacekeeping Missions. “Serving under the blue flag, 174 gallant Indian soldiers have made the supreme sacrifice over the years, the largest number among troop-contributing countries. In keeping with this tradition, we have today more than 5000 personnel deployed across 9 missions.” India has also provided 2,00,000 doses of COVID-19 vaccines for UN Peacekeeping personnel worldwide in March this year. “We have shown today, both in the rollout out of the UNITE Aware Platform, as well as the actionable elements of training incorporated in the MoU, that India believes in walking the talk when it comes to the safety and security of UN peacekeepers. We hope that in our discussions today, we get an equally strong reaffirmation of the UN’s intent,” he said.