Girls are leaving behind boys when they get opportunity: President 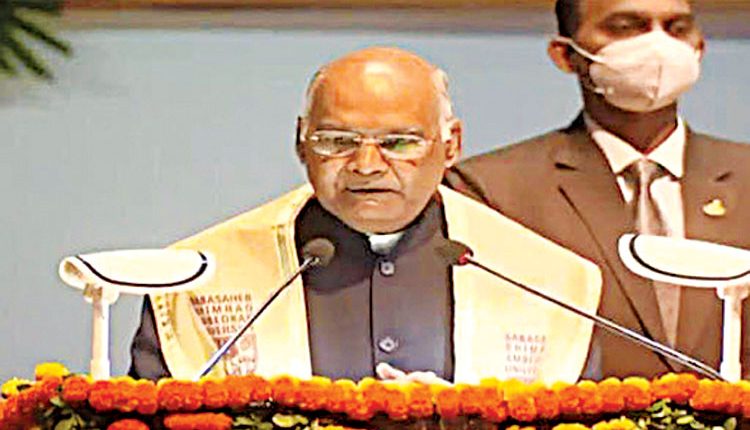 New Delhi, Aug 26 (FN Bureau) President Ram Nath Kovind said on Thursday that our aim of achieving excellence in the field of modern science and technology, by drawing inspiration from cultural and ethical values, will be accomplished only when all students and teachers work with full devotion. He made special mention about the girls and claimed that they are the pride of the country. Addressing the 9th convocation of Dr. Bhimrao Ambedkar University here on Thursday, the President also laid the foundation stone of Savitribai Phule Women’s Hostel. Governor Anandiben Patel and Chief Minister Yogi Adityanath were also present on the occasion.

The President said that today I feel proud to lay the foundation stone of Savitribai Phule Women’s Hostel. He said that the revolutionary steps taken by Savitribai Phule 175 years ago for the education of the girls. It is relevant even today. Especially after studying about the status of women in the then society, it comes to know that today our daughters are increasing the pride of the society and the country all over the world.

Mr Kovind said that the performance of the country’s daughters in the Tokyo Olympics has instilled a sense of pride in the entire country. “Our daughters are making their impressive presence in every field. When given equal opportunities, our girls surpass even the boys. The number of daughters is more than the sons among the promising medal winners in the convocation too. The number of daughters is also high among the winners, this change should be seen as a step towards a healthy society and an advanced state of the nation.

This was the original dream of Baba Saheb which seems to be coming true,” he said. During my visit to UP, I got a chance to know more about the special efforts being made in the field of education here. According to the new National Education Policy, the steps are being taken to strengthen the education system in UP too,” he said. The President also praised the work taken by Chief Minister Yogi Adityanath in the interest of the people of the state including education. “In the field of education, the Yogi Adityanath government has awakened the people. It is too little to praise him. That is why I express my deep appreciation to the Governor Anandiben Patel, Chief Minister Yogi Adityanath and his officers and employees.