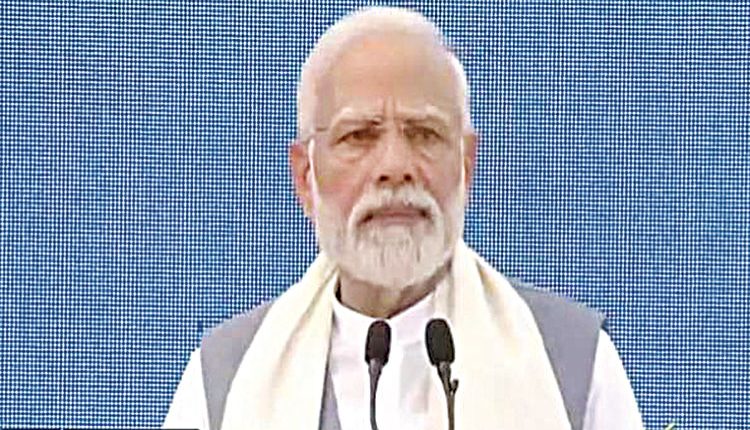 New Delhi, Oct 20 (Representative) Prime Minister Narendra Modi on Thursday launched Mission LiFE, a global action plan that nudges individuals to practise effective environment-friendly actions aimed at saving planet earth from the consequences of climate change. UN Secretary General Antonio Guterres, who is on a three-day India visit, was also present on the occasion. “There is a misconception that climate change can only be resolved by policy intervention and by the intervention of International Institutions. “Each citizen has to take responsibility for protecting the environment. Mission LiFE is based on the mantra that every small action counts,” the Prime Minister said.” For example, instead of keeping the temperature of the AC at 18 degrees and then taking a blanket, keep the AC temperature at 24 degrees and reduce electricity consumption… “Instead of using a vehicle to go to the gym, one should use bicycle to protect the environment and for betterment of health,” he added.

Modi pointed out that people are experiencing the effects of climate change in their surroundings and in the last few decades unexpected calamities have been witnessed. He said that the situation makes it amply clear that climate change goes beyond only policy-making and people themselves are finding that they should contribute as an individual, families and as communities to the environment. “The mantra of Mission Life is Lifestyle For Environment. Mission LiFE inspires us to do all that can be done in our everyday life to protect the environment. Mission LiFE believes that the environment can be protected by making changes in our lifestyle,” he said. Modi gave the example of the adoption of LED bulbs in India for reducing electricity bills and protecting the environment. “This led to massive savings and environmental benefits and this is a recurring permanent benefit,” he added. The Prime Minister recalled that India has had a tradition of worshipping nature for thousands of years.

He threw light on the concept of ‘Reduce, Reuse and Recycle’ and circular economy and mentioned that it has been a part of the lifestyle of Indians for thousands of years. “India is committed to tackling the menace of climate change. The annual per capita carbon footprint in India is only about 1.5 tonnes, compared to the world average of 4 tonnes per year,” he said. “We have to remember this mantra — Prakriti Rakshati Rakshita, that is, those who protect nature, nature protects them. I believe we will build a better world by following our Mission LiFE,” he concluded. Modi and the UN Secretary General also held bilateral meeting prior to the launch of the Mission and paid floral tributes at the Statue of Unity. Congratulatory video messages on the launch of Mission LiFE by the heads of 11 nations representing all regions of the United Nations were also relayed. The Prime Minister expressed delight at the support that has been showered upon India for taking up the Mission LiFE initiative and thanked the heads of all nations for sending in their congratulatory messages.