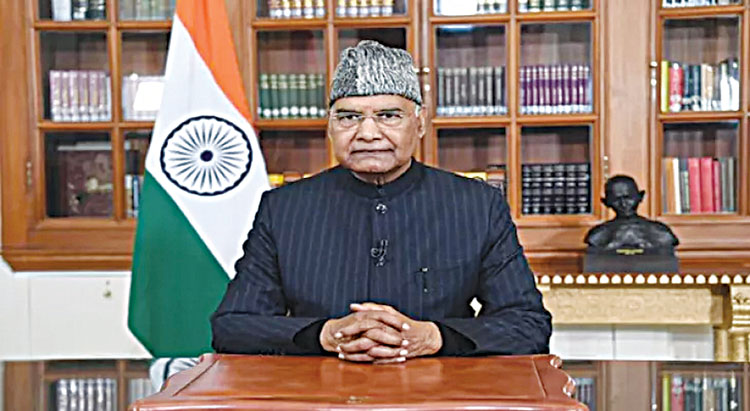 New Delhi, Jan 25 (FN Bureau) The Indian economy is on move again after the slowdown due to Covid-19 pandemic, and against all odds, India launched world’s biggest vaccination drive against the virus, President Ram Nath Kovind said on Tuesday, in his address to the nation, ahead of the 73rd Republic Day. The President called it an “unprecedented crisis” and said due to interventions by government and authorities, the situation is improving. “The world has never been in so much need of help as now. It has been over two years now and the humankind is still battling with Novel Coronavirus. Hundreds of thousands of lives have been lost, and the world economy has been reeling under the impact,” Kovind said.

“The world has suffered from unprecedented misery, and surge after surge of new variants have been posing new crises. It has been an extraordinary challenge to humankind,” he said. He said the pandemic management was bound to be all the more difficult in India with its high population density, and limited resources as a developing economy. “We did not have the level of resources and infrastructure needed to battle this invisible enemy. But it is only in such difficult times that the resilience of a nation shines forth. I am proud to say that we have shown an unmatched resolve against the Coronavirus pandemic,” he said. “In the first year itself, we raised the healthcare infrastructure and also reached out to help others. By the second year, we had developed indigenous vaccines and launched the world’s biggest vaccination drive in history,” he said.

The President said the leadership, policy-makers, administrators and others at the Central and state levels have made timely interventions. “Due to such interventions, the economy is on move again. It is a testimony to India’s spirit in the face of adversity that the economy is projected to grow at an impressive rate in this fiscal, after going through contraction last year. This shows the success of the Atmanirbhar Bharat Abhiyan, launched in the previous year,” he said. “The government has shown relentless focus on reforming every economic sector and providing a helping hand wherever necessary. The impressive economic performance is made possible due to improvement in the agriculture and manufacturing sectors,” he said. He also urged people not to drop their guard and continue following the Covid-19 protocols. “There have been setbacks, unfortunately, as the virus makes a comeback with new mutations. Countless families have gone through a harrowing time. There are no words to express our collective trauma. The only saving grace is that many lives could be saved. As the pandemic is still wide-spread, we must remain alert and not let our guard down,” he said. “Wearing mask and maintaining social distancing have been essential parts of Covid-appropriate behaviour,” he added.